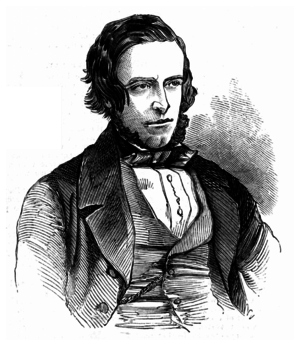 Viscount Goderich belongs to that class of young noblemen in this country who find their surest hope of gaining a place in the public regard, in identifying themselves with popular progress, and what is generally termed the cause of the people. Stepping from the pedestals which rank and wealth have raised for them, they meet the classes below them half way — are the first to extend the hand of sympathy, and to propose the interchange of mutual good offices. Viscount Goderich, during the course of his brief public life, has been unceasing in his endeavours to advance the comforts and welfare of the lower and particularly the working classes, and to elevate their station in society. In the year 1852 he had an opportunity of signally evincing the sincerity of that feeling, when he laudably exerted himself to promote an amicable adjustment of the serious differences which for so long a time had unhappily subsisted between the master engineers and their workmen in the iron trade.

George Frederick Samuel Robinson, Viscount Goderich, only son of the Earl of Ripon, who in years gone by was so well known by the soubriquet of "Prosperity Robinson," was born on Oct. 24, 1827, and is, consequently, still a very young man. He was privately educated; and, in J 841), was for a short time attache to the special mission sent to Brussels by Lord Palmerston, to endeavour to put an end to the war between Austria and Sardinia, and of which mission the Right Hon. Sir Henry Ellis was the head. Very shortly after his return to England he began to engage public attention by the interest he took in all questions affecting the working classes.

At the general election in 1852 he was returned for Kingston-upon-Hull, in conjunction with Mr. James Clay, by a large majority, over the then Ministerial candidate, Mr. Bramley Moore, and the Hon. C. L. Butler. He was, however, unseated on petition, very shortly after he had taken his seat. Although opportunities of frequently addressing the House of Commons were thus denied him, the noble Viscount made one speech, which he delivered with great self-possession, yet in a manner at once evincing so much modesty and frankness that he succeeded in passing that ordeal of criticism which is so trying to young members. Although unseated on the ground of bribery practised by his agents, the committee exonerated him from all connivance at these corrupt practices.

When Mr. Stansfield was unseated for Huddersfield for bribery, political parties in the town, favourable to the late member, introduced Mr. Joseph Starkey, an eminent manufacturer, and of Liberal politics, as his successor. That section of the Liberals, however, who took part in unseating Mr. Stansfield, was anxious again to introduce Mr. Williams, the unsuccessful candidate at the general election. This gentleman entered an appearance, but nothing more, and upon his leaving the field, the choice of his friends fell upon Lord Goderich, who consented to stand for the borough.

On the 30th of March, therefore, his Lordship met a large body of his future constituents in the Philosophical Hall, in order to make known to them his political creed. His reception was of a most gratifying description. Having been introduced to the meeting by the retiring candidate, Mr. Williams, he vindicated himself from any participation in the acts of bribery alleged in the Kingston-upon-Hull petition, and then proceeded to state his political views. First, however, with regard to the terms on which he sought to obtain the suffrages of the people of Huddersfield. He remarked, that if he had been willing to profess principles which were regarded as more in consonance with the position which he held, and which Mr. Williams had told them, was his misfortune and not his fault (Laughter and Cheers); if he had had the misfortune, not only to be "a live Lord," but to have acted, as many live Lords had acted, he might have obtained a seat in Parliament with no trouble, no expense, and no inconvenience (Loud applause). But he only sought a seat there to advocate those principles which in his heart he believed to be true; and, therefore, he at once had appealed to large constituencies as am independent candidate. The noble Viscount then explained his principles to be those of enlightened and steady progress; of reform, rapid but not hasty — never ceasing, but not violent. He was the advocate of that reform which was the only safeguard against revolution — of that reform which was in fact the truest Conservatism; and which had never, so far as he had learned, been the ruin of empires, whilst the opposite policy had been so (Loud applause). One of the causes which led him most to rejoice at the final settlement of the Free-trade policy, was that it would open the way to the consideration of another question in which he felt personally the deepest interest, the question of Parliamentary Reform. The only principle on which he would rest the representation was that it should be extended to the utmost possible point; and he should be willing to advance in that direction by all the means which the circumstances of the country would allow (Applause). He had no sympathy with the principle of finality (Applause). Passing to the ballot, and the re-distribution of electoral districts — both of which measures he advocated — his Lordship then touched upon the questions of Church endowment by the State, and grants out of the public revenue for religious and ecclesiastical purposes — to both of which he expressed his decided hostility; and he concluded his speech by stating that he should go to the House of Commons the advocate of the cause of the people, and in that capacity alone would he act. The noble Viscount was returned for the borough by a majority of 82 over Mr. Starkey.

As may be gathered from his declared opinions, Viscount Goderich is of Liberal politics, in favour of the extension of the suffrage and the ballot, and announces himself as an independent supporter of the present Government. In 1851 he married Miss Vyner, eldest daughter of Henry Vyner, Esq., and grand-daughter of Earl de Grey.