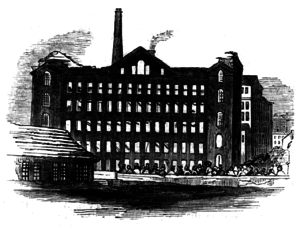 We are indebted to a correspondent at Huddersfield for the annexed sketch of the shell of a large woollen mill belonging to Joseph Kaye, Esq., situate at Folly Hall, which was destroyed by fire on Monday morning. The conflagration broke out on the third story, about a quarter before two, a.m., and at half-past two so rapid had been the work of destruction, that the roof and floors had fallen in; and before five all risk of the fire extending to the adjacent mills was removed. The building was occupied by various parties, who rented room and power from Mr. Kaye, and the loss is estimated at sixty thousand pounds, only very partially covered by insurance, as the offices objected to the risk from so many occupants in one building. Not less than seven hundred people will be thrown out of work by this unfortunate occurrence. The building is, or was, a handsome stone structure, forming the front of a cluster of mills equally large, all belonging to the same proprietor, and which must all have perished but for the entire absence of wind at the time. The building immediately behind was on fire two or three times, but was fortunately soon extinguished. When the conflagration was at its extreme height, the flames were above the large chimney, and burnt from the three upper rows of windows with an awful glare, so that at the distance of a mile the smallest type might have been read distinctly.