The following report is reproduced with permission from www.railarchive.org.uk / Ian Dinmore. 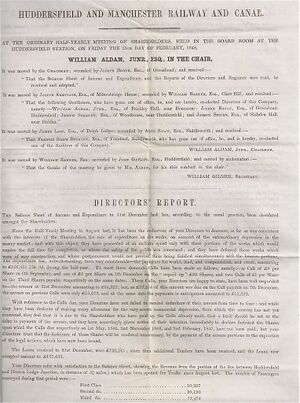 HUDDERSFIELD AND MANCHESTER RAILWAY AND CANAL.

AT THE ORDINARY HALF-YEARLY MEETING OF SHAREHOLDERS, HELD IN THE BOARD ROOM AT THE HUDDERSFIELD STATION, ON FRIDAY THE 25th DAY OF FEBRUARY, 1848,

It was moved by the Chairman; seconded by Joseph Brook, Esq., of Greenhead; and resolved:—

"That the Balance Sheet of Income and Expenditure, and the Reports of the Directors and Engineer now read, be received and adopted."

It was moved by Joseph Armitage, Esq., of Milnesbridge House; seconded by William Barker, Esq., Clare Hill; and resolved:—

"That the following Gentlemen, who have gone out of office, be, and arc hereby, re-elected Directors of this Company, namely:— William Aldam, Jumr., Esq., of Frickley Hall, near Doncaster; Joseph Brook, Esq., of Greenhead. Huddersfield; Joseph Starkey, Esq., of Woodhouse, near Huddersfield; and Joseph Stocks, Esq., of Shibden Hall, near Halifax."

It was moved by James Lees, Esq., of Delph Lodge; seconded by Abel Shaw, Esq., Saddleworth; and resolved:—

"That Francis Shaw Buckley, Esq., of Tunstead, Saddleworth, who has gone out of office, be, and is hereby, re-elected one of the Auditors of this Company."

It was moved by William Barker, Esq; seconded by John Gatliff, Esq., Huddersfield; and carried by acclamation :—

"That the thanks of the meeting be given to Mr. Aldam, for his able conduct in the chair."

The Balance Sheet of Income and Expenditure to 31st December last has, according to the usual practice, been circulated amongst the Shareholders.

Since the Half-Yearly Meeting in August last, it has been the endeavour of your Directors to decrease, as far as was consistent with the interests of the Shareholders, the rate of expenditure on the works, on account of the extraordinary depression in the money market; and with this object, they have proceeded at an uniform speed only with these portions of the works which would require the full time for completion, or where the safety of the public was concerned; and they have deferred those works which were of easy construction, and where postponement would not prevent their being finished simultaneously with the heavier portions. The expenditure has, notwithstanding, been very considerable — the payments for works, land, and compensation, and stock, amounting to £166,451 13s. 9d. during the half-year. To meet these demands, Calls have been made as follows, namely:— a Call of £3 per Share on 6th September, and one of £2 per Share on 7th December on the "unpaid up" £30 Shares, and two Calls of £1 per Share on the Third Shares payable respectively on the same dates. These Calls, your Directors are happy to state, have been well responded to — the arrears at 31st December amounting to £34,027; but, as £19,254 of this amount was due on the Call payable on 7th December, the arrears on previous Calls were only £15,673, and at the same date the payments in anticipation amounted to £11,322.

With reference to the Calls due, your Directors have not failed to remind defaulters of their arrears from time to time; and while they have been desirous of making every allowance for the very severe commercial depression, from which the country has not yet recovered, they feel that it is due to the Shareholders who have paid up the Calls already made, that a limit should be set to the delay in payment of the arrears, and they have accordingly given notice of their intention immediately to declare forfeited the Shares upon which the Calls due respectively on 1st May, 1846, 2nd November 1846, and 2nd February, 1847, have not been paid; but your Directors trust that the forfeiture of these Shares will be rendered unnecessary, by the payment of the arrears previous to the expiration c: the legal notices, which have now been issued.

The Loans received to 31st December, were £120,145; since then additional Tenders have been received, and the Loans now accepted amount to £137,695.

Your Directors refer with satisfaction to the Balance Sheet, showing the Revenue from the portion of the line between Huddersfield and Heaton Lodge Junction, (a distance of 3¾ miles,) which has been opened for Traffic since August lust. The number of Passengers conveyed during that period were:—

Articles about the Huddersfield and Manchester Railway | Articles from 1848 | Articles from the 1840s | Reports
This page was last modified on 8 September 2020, at 15:49.