The following prospectus is reproduced with permission from www.railarchive.org.uk / Ian Dinmore.

THE HUDDERSFIELD AND MANCHESTER RAILWAY AND CANAL UNDERTAKING. 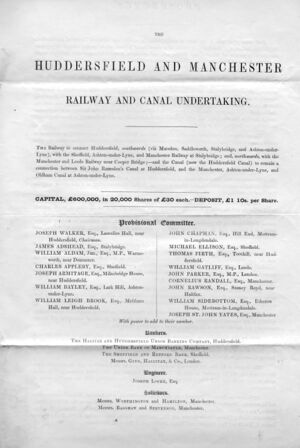 With power to add to their number. 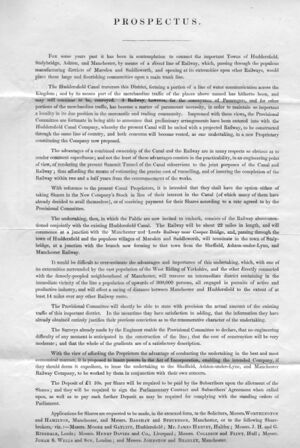 For some years past it has been in contemplation to connect the important Towns of Huddersfield, Stalybridge, Ashton, and Manchester, by means of a direct line of Railway, which, passing through the populous manufacturing districts of Marsden and Saddleworth, and opening at its extremities upon other Railways, would place these large and flourishing communities upon a main trunk line.

The Huddersfield Canal traverses this District, forming a portion of a line of water communication across the Kingdom; and by its means part of the merchandize traffic of the places above named has hitherto been, and may still continue to be, conveyed. A Railway, however, for the conveyance of Passengers, and for other portions of the merchandize traffic, has become a matter of paramount necessity, in order to maintain so important a locality in its due position in the mercantile and trading community. Impressed with these views, the Provisional Committee are fortunate in being able to announce that preliminary arrangements have been entered into with the Huddersfield Canal Company, whereby the present Canal will bo united with a projected Railway, to be constructed through the same line of country, and both concerns will become vested, as one undertaking, in a new Proprietary constituting the Company now proposed.

The advantages of a combined ownership of the Canal and the Railway are in many respects so obvious as to render comment superfluous; and not the least of these advantages consists in the practicability, in an engineering point of view, of rendering the present Summit Tunnel of the Canal subservient to the joint purposes of the Canal and Railway ; thus affording the means of estimating the precise cost of tunnelling, and of insuring the completion of the Railway within two and a half years from the commencement of the works.

With reference to the present Canal Proprietors, it is intended that they shall have the option either of taking Shares in the New Company’s Stock in lieu of their interest in the Canal (of which many of them have already decided to avail themselves), or of receiving payment for their Shares according to a rate agreed to by the Provisional Committee.

The undertaking, then, in which the Public are now invited to embark, consists of the Railway above-mentioned conjointly with the existing Huddersfield Canal. The Railway will be about 22 miles in length, and will commence at a junction with the Manchester and Leeds Railway near Cooper Bridge, and, passing through the town of Huddersfield and the populous villages of Marsden and Saddleworth, will terminate in the town of Stalybridge, at a junction with the branch now forming to that town from the Sheffield, Ashton-under-Lyne, and Manchester Railway.

It would be difficult to over-estimate the advantages and importance of this undertaking, which, with one of its extremities surrounded by the vast population of the West Riding of Yorkshire, and the other directly connected with the densely-peopled neighbourhood of Manchester, will traverse an intermediate district containing in the immediate vicinity of the line a population of upwards of 300,000 persons, all engaged in pursuits of active and productive industry, and will effect a saving of distance between Manchester and Huddersfield to the extent of at least 14 miles over any other Railway route.

The Provisional Committee will shortly be able to state with precision the actual amount of the existing traffic of this important district. In the meantime they have satisfaction in adding, that the information they have already obtained entirely justifies their previous conviction as to the remunerative character of the undertaking.

The Surveys already made by the Engineer enable the Provisional Committee to declare, that no engineering difficulty of any moment is anticipated in the construction of the line; that the cost of construction will be very moderate ; and that the whole of the gradients are of a satisfactory description.

With the view of affording the Proprietors the advantage of conducting the undertaking in the best and most economical manner, it is proposed to insert powers in the Act of Incorporation, enabling the intended Company, if

they should deem it expedient, to lease the undertaking to the Sheffield, Ashton-under-Lyne, and Manchester Railway Company, to bo worked by them in conjunction with their own concern.

Applications for Shares are requested to be made, in the annexed form, to the Solicitors, Messrs. Worthington and Hamilton, Manchester, and Messrs. Bagshaw and Stevenson, Manchester, or to the following Sharebrokers, viz.:— Messrs. Moore and Gatliff, Huddersfield ; Mr. James Hervey, Halifax; Messrs. J. H. and G. Ridsdale, Leeds; Messrs. Henry Davies and Co., Liverpool; Messrs. Collison and Flint, Hull; Messrs. Jonah S. Wells and Son, London ; and Messrs. Johnston and Bradley, Manchester.

Articles about the Huddersfield and Manchester Railway
This page was last modified on 10 September 2020, at 09:10.