The Huddersfield Young Men's Mental Improvement Society was formed in 1841 by employees of John Frederic Schwann, with the support of their employer who became the society's President.

Although the society adopted many of the principals of the Mutual Improvement movement — such as a democratic structure with members forming the committee and fellow working men teaching the evening classes — it seems that Schwann soon realised that the society's future growth and success would necessitate moving towards the alternative model of the Mechanics' Institutes, which had a stronger emphasis on technical subjects.

The society is the direct ancestor of the University of Huddersfield.

German born cloth merchant John Frederic Schwann had settled in Huddersfield following the accidental death of his younger brother, Sigismund, in 1828. Despite being "unacquainted with the language", his "indomitable perseverance enabled him speedily to acquire a competent knowledge of the English language, and likewise to grasp and retain all the necessary details of manufacturing and mercantile transactions."

Schwann encouraged his employees to further themselves and helped them to establish the Young Men's Mental Improvement Society in May 1841, based on the principals of the Mutual Improvement movement.[1] As noted by Christopher Radcliffe of the University of Leeds:[2]

Unlike most mechanics' institutes, mutual improvement societies were of the people not for the people. The movement as such began in London at the end of the Napoleonic Wars and spread to the north of England around 1825. There were however earlier isolated examples. The societies were democratic and usually provided instruction by working men themselves in elementary, and sometimes in other subjects. Political discussion was also a major feature. Mutual improvement societies were set up by early nineteenth‐century radicals, by Owenites, Chartists and secularist groups. 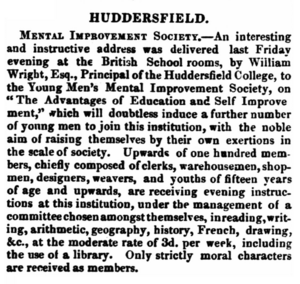 By April 1842, the society had around 100 members aged 15 upwards, who attended evening lessons at the British School on Outcote Bank in subjects including reading, writing, arithmetic, geography, history, French, and drawing, some of which were taught by Schwann. The Leeds Times noted that membership was "chiefly composed of clerks, warehousemen, shopmen, designers [and] weavers" and that the society's committee was formed from its membership.[3]

The society's continued growth in membership appears to have convinced Schwann that a move towards the Mechanics' Institute model — with greater emphasis on technical subjects and guest lectures from noted experts — would be beneficial.

On Tuesday 29 November 1842, Edward Baines[4], the editor of the Leeds Mercury and a prominent advocate of working-class adult education, gave a talk on the subject of "On the Spirit of the Student" in which he described how Mechanics' Institutes in "Leeds, Halifax, Bradford, York, and Wakefield" were flourishing. Afterwards, Schwann "expressed his hope than an Institution on a more extended scale than the present, for the improvement of youth, would be formed in the town of Huddersfield".[5]

At the society's first annual meeting, held on 30 December 1842, it was stated that the membership had increased to 140 and "many of the young men spoke strongly of the benefits they had personally received from the opportunities of instruction presented to them" by the society.[6]

It seems discussions then took place with the Huddersfield Philosophical Society as to the desirability of forming a union between the two societies, which would have allowed the Young Men's Mental Improvement Society to make use of the Philosophical Hall (opened May 1837) on Ramsden Street. However, it seems no agreement was reached.

During June 1843, the principal of Huddersfield College, William Wright, gave a series of twelve lectures on "Pneumatics and Mechanics". The Leeds Mercury reported that those who attended were "delighted by Mr. Wright's clearness of demonstration".[9]

The society changed its name to the Huddersfield Mechanics' Institute following a meeting held on 1 August 1843 chaired by J. Kell.[10]

In December 1844, the institute expressed its desire to "afford to the female portion of the working-class society advantages similar to those which the Institute offers to males". However, it would be a further two years before the Huddersfield Female Educational Institute was formed.