Huddersfield Sanatorium for Infectious Diseases was built in the 1890s as an isolation hospital to replace the Borough Fever Hospital at Birkby (which had previously been the workhouse hospital). A separate Smallpox Hospital was situated on Dalton Bank.

The foundation stone of sanatorium was laid on 10 June 1896 by Alderman William Henry Jessop, the chairman of the Health Committee.[1] The architects were Edward Thomas & Sons of London and the contractors were Abraham Graham & Sons. The estimated building cost was reported as over £26,300 and the cost of acquiring the land was £3,231.[2] 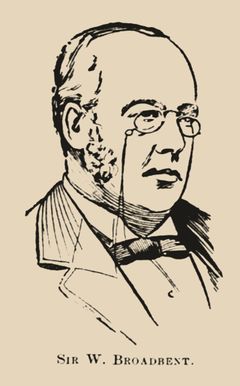 The sanatorium was formally opened by Sir William Broadbent in 1898.

The site compromised an administrative block and three separate "pavilions" with 90 beds in total, all connected by covered walkways. Each pavilion contained:

Miss A. Mulligan of Wolverhampton was appointed the matron in January 1899 at an annual salary of £70.[3]

By the 1920s, it had been renamed the Mill Hill Isolation Hospital and a separate maternity ward had opened.

In August 1927, the hospitals matron, Miss Agnes Dutton (aged 48), died suddenly of a seizure caused by a liver condition. Dr. G.S. Moore, the Medical Officer of Health, told the inquest into her death that Miss Dutton was "one of the most devoted nurses he had ever known".[4]

In January 1933, the hospital dealt with outbreaks of influenza and scarlet fever in the Huddersfield area. By late January, 61 patients had been isolated, including Dr. William Barclay of Greenhead Road and two of his children.[5]

By November 1933, an outbreak of diphtheria, combined with the earlier scarlet fever outbreak, led to the hospital becoming full and new cases were instead taken to the Clifton Isolation Hospital near Brighouse.[6] By late November, 150 patients were at Mill Hill, 30 at the Whitehouse Farm Smallpox Hospital, and 4 at Clifton. In the local press, Dr. J.M Gibson, the Medical Officer for Huddersfield, appealed to parents to take up the free offer of immunisation.[7] Incidences of diphtheria continued throughout 1934 and around 50% of the local children had been immunised by the end of the year.[8] In March 1935, the Town Council reported that "the epidemics of scarlet fever and diphtheria in Huddersfield were abating" and the number of patients at Mill Hill had been reduced to 100.[9]

In the autumn of 1946, a small outbreak of paratyphoid led to nine patients being isolated at the hospital.[12] Huddersfield Corporation Health Department reported that they believed the fever had been brought to Huddersfield by Mrs. Alice Halliwell of 17 Ings Road, Almondbury, who had eaten contaminated ice cream during a holiday at Aberystwyth.[13]

In 1949, an outbreak of "infantile paralysis" (polio) in the Huddersfield area saw patients being isolated at the hospital. By November, 15 people had died of the disease.[14] Amongst those who died were Brian Smethurst (aged 9) from Moldgreen, Mrs. Grace Mary Sykes (wife of Neville Sykes) of St. Helen's Gate in Almondbury.

The hospital was closed in the mid-1990s.

The area is now primarily a housing estate, with Kirkwood Hospice at the southeast corner.

Buildings | Demolished buildings | Hospitals, infirmaries and convalescent homes
This page was last modified on 29 March 2019, at 07:53.