The Female Educational Established provided evening classes to girls and young women in Huddersfield between 1847 and 1883, after which it was amalgamated with the Huddersfield Mechanics' Institute.

It is generally regarded as being one of the first such institutes for women.

In the Huddersfield Mechanics' Institute's report of December 1844, it was recorded:[1]

The attention of your committee has been called during the past year to the propriety of endeavouring to afford to the female portion of the working-class society advantages similar to those which the Institute offers to males. There is certain no reason against but every reason for, the wife and daughter sharing the social, literary, and education privileges of the husband and son.

Exactly two years later, the Huddersfield Female Educational Institute was established to "provide for young females of the town and neighbourhood increased facilities for mental improvement, by means of evening classes, a library, addresses, and other such methods as may from time to time appear suitable."[2]

Amongst those attributed with the founding of the institute are John Frederic Schwann and his wife Henrietta, her brother Samuel Kell (who founded the Bradford Female Educational Institute circa 1857), William Paul England, and Joseph Batley.[3]

As noted by Teresa Gerrard and Alexis Weedon in their article "Working-Class Women’s Education in Huddersfield":[4]

As workers migrated from the rural countryside to the expanding towns and cities, extended families became divided. For working-class women this meant a movement of employment away from home-based industries toward factory work. At the same time, a shortage of domestic servants for the expanding middle classes necessitated the cultivation of working-class girls suitable to take up employment. All of these developments were debated as the evil effects of industrialization and were reflected in the provision of lessons offered at the Female Institute.

In December 1846, the committee of the institute announced that Mr. Lundy of the Rastrick British School had been appointed and that lessons would commence on the evening of 5 January 1847. The Leeds Times reported that 63 females had already enrolled.[5]

We are happy to learn that an institution with the above title is about to be established, having for its object "to provide for young females of that town and neighbourhood increased facilities for mental improvement, by means of evening classes, a library, addresses, and such other methods as may from time to time appear suitable. The object of this institution is not to give instruction on religious subjects, thereby interfering with the Sunday schools at present in operation, where it can be more effectually and directly inculcated, but to teach reading, writing, arithmetic, geography, history, and other branches of a sound, moral, and secular education."

The charge for attending the institute was 2d. per week. Those who supported the institute via annual subscriptions of 10s. or more were permitted to "nominate one member, who shall enjoy all the benefits of the institute".

Initially, meetings were held above "Mr. Heaps' workshop in Westgate"[7] before moving to the British School on Outcote Bank. In the spring of 1850 onwards, classes were held on the third floor of Netherwood's Buildings on King Street.[2] The latter building lacked a meeting room, so lectures were instead usually held in the Philosophical Hall on Ramsden Street.

The institute held its first soiree event on 15 November 1847, with Thomas Mallinson presiding. In his speech, Dr. Smiles "observed that in the district of Huddersfield the number of women who signed the marriage register with a cross was double that of men".[1] 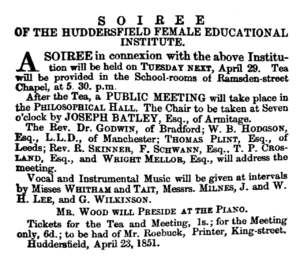 The Huddersfield Chronicle reported in April 1851 that "at present about fifty females [are] receiving instruction at this institution, whose ages vary from thirteen up to thirty years of age" and that "upwards of a thousand females have passed through this institution".[9]

In October 1852, secretary W.M. Nelson placed a notice in the local press to say that the institute was "desirous of engaging as an additional teacher a lady competent to give instruction in plain needlework and the elementary branches of education".[10]

An an appeal for funds in December 1854 gave the following description:[11]

The object of this institution is to afford to young females of this town and neighbourhood additional opportunities of mental improvement, by means of evening classes, a library, lectures, &c. It does not aim at giving instruction on religious subjects, thereby interfering with the Sunday schools at present in operation, where it can be more effectually and directly inculcated, but to teach reading, writing, arithmetic, geography, history, and other branches of a sound moral and secular education.

At a committee meeting held in December 1855, comprised of the "ladies who give their services as teachers and [the] gentlemen who subscribe annually 10s. and upwards, it was reported by treasurer William Paul England that the institute had a balance in hand of £70 and that the annual subscription list had risen from £36 to £110 since the previous year.[12]

In January 1856, the institute was described as having classes on "four evenings per week, with an average of 60 to 70 pupils."[13]

Frederick Crosland, the under-secretary of the Huddersfield Mechanics' Institute, was appointed the secretary for the Female Educational Institute in December 1856 and remained in the post for seven years.[14] 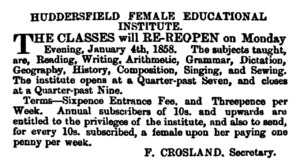 The 1857 annual meeting held on 8 April reported that classes were conducted by 17 teachers (6 paid and 11 unpaid) covering reading, writing, arithmetic, grammar, dictation, geography, history, sewing and singing (the latter being held on Wednesday evenings and conducted by Mr. James Peace). The committee members for the coming year were recorded as:[2]

The officers for the coming year were: 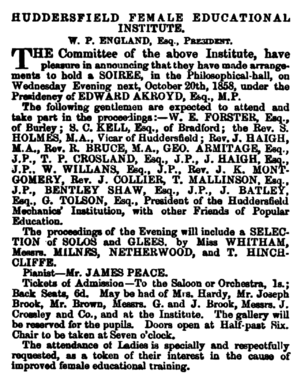 The institute's second soiree was held in October 1858, presided over by M.P. Edward Akroyd. At the event, the honourable secretary Mr. P.B. Shaw noted that although the institute did offer classes in singing and sewing, the bulk of the attendance was in the subjects of reading (75 pupils), writing (108), arithmetic (90) and geography (72). He also noted that "more than half the pupils on entering the institute are unable to write their names".[3]

In March 1864, Henry Whiteley, formerly the master of the Milnsbridge National School, was appointed as the new secretary of the institute.[18]

The 1863/64 annual report noted that eight of the pupils were married women, including one who then encouraged her two daughters to attend. The treasurer noted however that the expenditure for the year had been £134 10s. 6d., leaving a balance in hand of just 2s. 9d.[19]

A soiree was held on 27 October 1864 at the Gymnasium Hall on Ramsden Street, with the town M.P. Edward A. Leatham in the chair. [1]

Secretary Henry Whiteley stepped down during the 1865/66 year and his replacement was Mr. W.S. Brook, master of the Almondbury Grammer School.

By 1868, the institute had outgrown the room available on the third floor of Netherwood's Buildings and had begun to use Gladstone Chambers (also known as Gladstone Buildings) on King Street.

Secretary John F. Cook stepped down during the 1870/71 year, due to leaving the area, and was replaced by Mr. W.H. Hitchon.

In 1875, the institute began using the Board School on Beaumont Street for teaching.

After 37 years in existence, the Female Educational Institute ceased to exist circa May 1883.[20]

The following are a selection from local newspaper reports: