A project is currently under way to geo-index a number of historic maps of the Huddersfield area.

One of the aims is to make it easier to locate locations and properties which may not longer exist, or are no longer known by their historic name. For example, rows of terraced houses were sometimes named after their builder or a notable person who resided in them, or were given a name which differed from the street name — this often makes finding them on a modern map impossible, as the names fell out of use after street numbering was widely adopted. 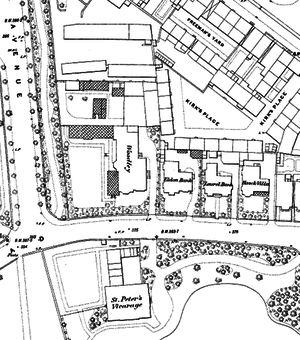 The data will then be used to create basic stub entries on Huddersfield Exposed, some of which will hopefully then be expanded in the future.

Free dataset file downloads (XML) are also available for each completed map. A description of the file structure can be found here.

Tip: If you are searching for a particular building or location, try using the site's search box at the top of each page.

The entire 1890s and early 1900s 1:2,500 O.S. maps have now been indexed and this supersedes the maps listed below in the "Ongoing" section. The first series O.S. maps (published in the early 1850s) will be geoindexed next.