The Early Closing Association was formed in early 1840s, and campaigned to abolish Sunday trading and to limit the hours worked by those in retail shops.

A branch was formed in Huddersfield following a meeting held in July 1855 at Simmons' Hotel. The following were initially elected to serve:[1]

By October 1855, the president of the association was the Rev. Josiah Bateman and the three patrons were Sir John William Ramsden, Joseph Brooke of Newhouse, and John Brooke of Armitage Bridge.[2]

The first public meeting was held on Thursday 25 October 1855 at the Philosophical Hall on Ramsden Street and was chaired by the Rev. Samuel Holmes.[3]

In November 1855, the committee announced that they had "induced the principal tradesmen in the town to close their shops at nine o'clock on Saturday evenings, commencing December 1st."[4] However, it was later stated that this had been only "partially effected" and that most of the tradesmen had soon abandoned the scheme.

An annual meeting was held on 23 September 1856, chaired by Mr. J.C. Laycock. During the year, the association had received receipts totalling £21 6s. ½d., the whole of which had been expended. Following the meeting, the committee established a Mutual Improvement Class, which took place once a week during the winter months. Amongst the lecture topics delivered to the classes were:

The 1857 annual meeting, held on 25 September, was notable for the attendance of Richard Oastler, then aged in his late 60s, whose entrance was met by "several rounds of cheering". The meeting was chaired by Edward Akroyd, the M.P. for Halifax, and Oastler was warmly encouraged to give a speech.[5]

Oastler returned for the 1859 annual meeting, where he proposed the following resolution, which was carried unanimously:

That the shopkeepers and traders who conform to the principals of this association merit our best thanks; and this meeting is of opinion that those who withhold their co-operation are preparing the way for an application to parliament for an act to enforce obedience to the public will.

The association published The Associative Principle During the Middle Ages in late 1859, which comprised the lectures given by Christopher Barker to members during the previous three years.[6]

In August 1864, the following notice was placed in the Huddersfield Chronicle:

The Linen and Woollen Drapers, Hosiers, Hatters, and Clothiers, beg to announce to the Public, that in accordance with Resolutions passed at a General Meeting of the Trades, it was thought necessary to curtail the house of business, and they unanimously resolved TO CLOSE their respective Establishments at 7 p.m., and on Saturday's at 9 p.m. until further Notice.

They confidently appeal to the Public to support them in this movement by purchasing early.

The association seems to have stopped meeting in the 1860s.

A new Huddersfield Early Closing Association, linked to the "Half Day Holiday Movement", was formed on 2 June 1886 with the following:[7] 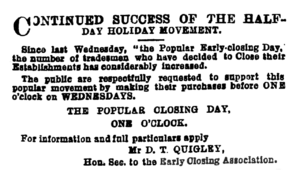 By July 1887, the association was promoting the closure of shops on Wednesday afternoons by asking locals to make any purchases by 1pm.