This page is part of the Holmfirth Flood Project which aims to make content available to researchers in advance of the 175th anniversary of the 1852 Flood which will be commemorated in 2027.
The following is a transcription of a historic newspaper article and may contain occasional errors. If the article was published prior to 1 June 1957, then the text is likely in the Public Domain. 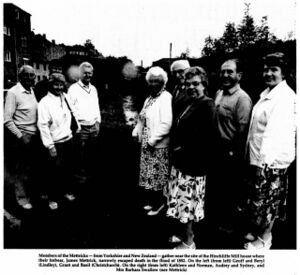 A New Zealand visitor to Huddersfield has been finding fascinating links with the Holmfirth flood of 1852, which killed 81 people.

Mr Basil James Mettrick, of Papanui, Christchurch, has discovered that his great-grandfather was James Mettrick, who had a miraculous escape as the floodwaters engulfed Hinchliffe Mill.

James, aged 24, was the only one saved out of a family of 10 whose house was demolished as an estimated 300,000 tonnes of water roared down the valley when Bilberry Reservoir burst its banks.

It was James's son, David James, who emigrated to New Zealand, where later members of the Mettrick family have held some prominent positions in government and administration.

Basil, visiting England with his 33-year-old son, Grant, says he has had a more modest career than some other members of the family. Aged 66, he is now an adviser on old people's personal security with a firm called Armourguard.

Grant works in a factory. Basil and his wife Jessie have two other sons: Philip, who is an acupuncturist and Brent, a principal in a building business.

They have been visiting Geoff and Beryl Mettrick at Kirkwood Drive, Lindley, who have been of great help in tracing a family tree leading to information on the Holmfirth flood link — and a great deal of other interesting family material.

"All we knew originally was that the Mettricks came from Yorkshire," says Basil. "We started telephoning round when visiting Britain six years ago, and got in touch with Geoff and Beryl at Huddersfield."

After learning that one of the older Mettricks had gone to New Zealand after the flood, Beryl spent days searching through documents in the Local Studies Library at Kirklees, while Basil was going through records kept by the Mormon Church in New Zealand.

Eventually, Beryl (a former teacher at Mount Pleasant School) established a family tree, and the information Basil had gained was tied in with it. "I think we are third removed cousins," Beryl says.

"The name James has gone right through," says Basil. "I am Basil James Mettrick and my uncle's name was James, too. There are about 45 Mettricks in New Zealand."

David James, who went to New Zealand, was listed as "a gentleman's son." His father, apparently, had been a local manufacturer, employing six people.

"David James must have been a businessman in New Zealand," says Basil. "He had an hotel in the coal-mining town of Denniston. He was a leader in the town and an instigator of rugby league and boxing."

Basil, too, is a rugby enthusiast, and was an All Black triallist in 1949. He plays tennis now.

During their visit to Huddersfield, Basil and Grant have stayed in a camper van near Holmfirth, and have visited the flood memorial.

They have also visited the Coronation Street tour at Granada TV, Manchester — "The Street" is the number one programme on New Zealand TV, with three screenings a week!

Clinging to life on a night that disaster struck

"The whole house gave way, and we were all swept down the stream, and I saw no more of any of them."

Some time after the flood disaster, James Mettrick wrote a dramatic account of how he narrowly escaped death that fateful night, when he was the only one saved of 10 people in the house at Hinchliffe Mill — which, with tragic irony, stood on Water Street.

"There were 10 of us in the house — my father, stepmother, and eight children," James wrote. "Somebody came and roused us just at one o'clock.

"I put on my trousers; my stepmother and I stood on the stairs. We looked out of the windows and saw a large quantity of water and sticks coming own. From their appearance, I knew the reservoir had burst.

"I and my stepmother came downstairs, and my father handed us the children who were asleep in the lower room for us to lift into the chamber.

"The water burst in at the window and through the door, and half-filled the chamber. I ran with the rest into the garret, except my father and one child, who we expect were drowned in the house.

"About half a minute after we had got into the garret, the whole house gave way, and we were all swept down the stream, and I saw no more of any of them.

"No part of the house touched me that I know of. When I got into Harpin's (Bottoms) dam, I caught hold of a piece of wood and sprang up.

"I got a good sob of breath, and then went under and lost my hold of the plank. On coming up again, I got hold of another, and again rolled over.

"At last I got hold of a small piece of wood, and paddled it towards the side. A gust of wind then came and blew me towards the land on the Austonley side.

"I leaped off the timber, and fell up to my neck in the water; but I managed to scramble out, and after falling several times, I got to a house, and stripped off my trousers and shirt (all I had on) and went to bed. I was nearly exhausted."