The name Lot Hinchliffe does not appear in any of the contemporary accounts of the 1852 Flood. In fact, he seemingly didn't die in 1852 — he married Ann Moody in January 1855 and likely died on 18 February 1906. 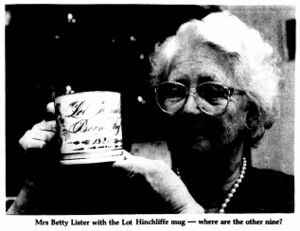 This half pint china christening mug bearing the name of Lot Hinchliffe picked out in gold leaf along with his date of birth, August 26 1824 is impressive enough.

But what would be even more noteworthy would be to discover the whereabouts of identical mugs which were made to mark the christenings of each of Lot's nine brothers.

The quest to find news of those mugs has been taken up by Lot's great granddaughter Mrs Betty Lister, of Mirfield.

"The mug has been passed down the family and came to me about 10 years ago. It's beautiful, as though it were made only yesterday," said Mrs Lister, who learned something about the story of Lot from her grandmother. And a tragic tale it was.

The family story is that it was Lot who raised the alarm about the Holmfirth Flood of 1852 when Bilberry reservoir burst and millions of gallons of water swept through Holmfirth and more than 80 people died.

"Lot and his family lived near the reservoir and at the time of the flood he was in bed with flu. He feared the reservoir was about to burst and got up to run down to Holmfirth and raise the alarm," said Mrs Lister.

Lot survived the floodwaters, but went down with pneumonia and died soon after his brave bid to warn others of the impending disaster. He was aged 27.