Strong arm man Jack in the throes of nostalgia 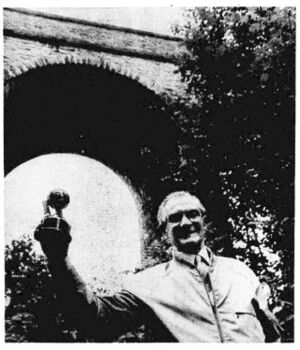 Fifty years ago to this day leg-break bowler Jack Crum went into the record books with a unique, and very impressive, achievement.

Jack, now 74, was playing for Armitage Bridge at Lockwood’s Birks Bottom ground when he threw a cricket ball over Lockwood Viaduct. And to this day only one other man has repeated the feat.

Jack still remembers that afternoon of September 10, 1938, vividly. He started 20 yards back, ran seven paces and hurled the ball, clearing a height of 129ft and a span of 30ft.

Such was the enormity of his throw, spectators said that had there been a house perched on top of the viaduct it would have cleared that too. And a collection after his success earned him a cool £2.

“It wasn’t something I’d planned. It was just an ambition,” recalled Jack, who had many other ambitions due to his exceptionally strong arm.

He wanted to throw a cricket ball over every ground in the Huddersfield League but couldn’t have got permission and he also wanted to attack R Percival’s world record throw of 140 yards.

Jack remembers his days before Armitage Bridge at Bradley Mills, where he was a fielders’ nightmare, using his incredible throwing strength to test his team-mates’ catching.

“At Bradley Mills I just used to throw, throw, throw. I was always strong and could always throw further than anyone else.”

Fifty years on and Jack will always have a personal memento of that September day back in 1938.

Gilbert Varley, then president of Armitage Bridge, presented Jack with the ball he used. It has since been mounted and inscribed and is a proud and lasting treasure.