This page is part of the Holmfirth Flood Project which aims to make content available to researchers in advance of the 175th anniversary of the 1852 Flood which will be commemorated in 2027.
The following is a transcription of a historic newspaper article and may contain occasional errors. If the article was published prior to 1 June 1957, then the text is likely in the Public Domain.

Today is the hundredth anniversary of the Holmfirth Flood, one of the biggest calamities in the domestic history of Yorkshire.

The disaster was caused by the bursting of the Bilberry Reservoir in the hills beyond Holmebridge, and below which Huddersfield’s new reservoir at Digley is now under construction.

The Bilberry Reservoir was one of those that came into existence to meet increasing water needs felt as the industrial era advanced.

Unfortunately, it was constructed without that attention to the working of natural forces which would be paid today. The consequence of this was that fifteen years afterwards the overcharged reservoir drawing its water from 1,920 acres of moorland burst and its contents were discharged on the Digley and Holme Valleys, which were Inundated and devastated.

For some days before February 5, 1852, the North of England had been visited by very heavy rains. Indeed, about the same time as the Holmfirth Flood, an aqueduct across the Lancashire and Yorkshire Railway line near the Littleborough Tunnel burst, did considerable damage, and dislocated traffic between Lancashire and Yorkshire.

The ill-fated reservoir at Bilberry was already overflowing, and fears for the safety of the embankment were expressed by a number of people who saw the state of the reservoir on February 4.

But previous fears that the embankment would not hold had not been realised. Familiarity had bred indifference if not contempt, and the warnings unhappily went unheeded.

About one o’clock in the morning of February 5, when the rains had ceased and a brilliant winter moon shone on the scene, the waters, having washed away the earth backing, destroyed the dam, which had been subsiding for years, and swept with tremendous force towards Holmbridge and Holmfirth.

An early victim was Digley Mill, part of which was carried away, but the most appalling damage was that done in the Holme VaJley itself, and the hamlet of Hinchliffe Mill, between Holmebridge and Holmfirth, was well-nigh wiped out.

About half of the victims belonged to that locality.

Hapless people were unaware of the fate that was upon them, for they were asleep in their beds when the reservoir burst, and no warning reached them. The warning that was given in Holmfirth itself arrived not more than five minutes before the flood waters invaded the town.

Many incidents are recounted of the Holmfirth Flood. Most families in the valley were bereaved by the loss of relatives near and distant, and many descendants now living preserve mementoes of the disaster.

In Water Street, Hinchliffe Mill, the family of Charlesworth were all drowned except the father, and the sole survivor of a family at Mill Hill was a child who was away from home at the time. The head of this family, Richard Shackleton, was drowned with his wife and three children, and his body was recovered a fortnight after the flood at Ferrybridge, near Pontefract. It was identified by a mark on the shirt neckband.

The survivor of this family, then a girl of ten, owed her life to the fact that she was staying with her grandmother at Linthwaite. As Mrs. Alfred Baxter, she lived to be an octogenarian, surviving the flood by seventy years. Her great-granddaughter, Miss Evelyn Shaw, still lives at 713, Springfield Place, Linthwaite, close to the house which sheltered the little orphan on the morning of the flood.

Bodies of the victims were taken to the inns of the Holmfirth district for identification.

Some harrowing stories were told at the inquest, at which one small child told how the waters burst upon the family without warning. Her mother held an infant above the water outside the window, hoping that help would come, but when the front of the house collapsed, she and the child were swept away by the raging torrent.

Heavy rains returned after the flood and seriously hampered the search for the bodies of victims, which went on for days.

The burial of a number of the victims at Holmebridge was held up because the rains had filled the graves in the churchyard with water.

Holmebridge Church itself was in a sorry state, for it received the whole force of the flood waters as they surged out of the Digley Valley into the main valley, and washed bodies out of the graves.

The disaster evoked the nation's sympathy but although close on £70,000 was raised for relief, about half this sum was returned to the subscribers because, strangely enough, not sufficient claims were made upon the fund.

The Height of the Flood Waters 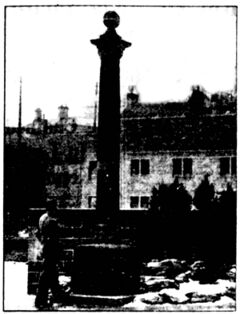 The brass plate on the pillar erected in Town Gate, Holmfirth, indicates the height reached by the flood waters on February 5, 1852, when Holmfirth was partially destroyed by the bursting of the Bilberry Reservoir.

On the plate is the following inscription, done by the late Rev. B. S. Chambers, a former Methodist minister at Holmfirth:

This stone was erected in 1801 to commemorate the Short Peace called the Peace of Amiens.
The Height of the Flood caused by the Bursting of the Bilberry Reservoir,
February 5th, 1852,
Whereby 81 lives were lost."

The memorial stands on the site of the stocks and is familiarly known as "Th' Owd Genn," apparently after a seventeenth-century constable of Holmfirth.

Contemporary Accounts of Disaster in Exhibition

An exhibition dealing with the flood, staged in a showcase in the entrance hall of the Tolson Memorial Museum, Ravensknowle, was opened yesterday.

There is a copy of "The Illustrated London News," dated a month after the disaster, showing six pictures of the destruction caused by the flood, together with notes of the event.[1]

Near to it is a map of the district printed by "The Huddersfield and Holmfirth Examiner" and circulated at the time.

Another exhibit is a copy of "The Huddersfield Chronicle," which gives an account of the flood.

An interesting relic is one of the subscription lists, which shows that various places of worship, not only in Yorkshire and Lancashire but much further afield, contributed by means of collections.

A poem by Jonathan Hey "on the late Holmfirth Catastrophe" contains twenty verses, and alongside is a list of the names of the people who lost their lives.

Finally, there is a notice issued by the Committee for the Relief of the Sufferers. This offers payment to the sufferers for clearing the debris at the mills. Men over the age of eighteen were offered 1s. 6d. per day.

The exhibition has been staged by Miss V. Hodgson, an assistant at the museum.