Of the 78 named victims of the Holmfirth Flood of 1852, only 5 do not have an known burial register entry and none match the description given by pathologist Michael Green. Therefore, it is highly unlikely that the remains are linked to the 1852 Flood. 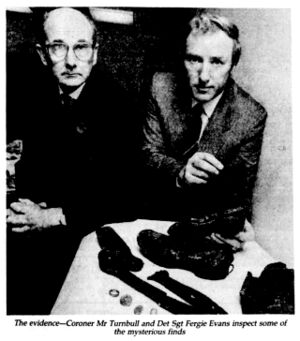 Human bones discovered in a disused mill dam probably belonged to a female victim of the famous Holmfirth Flood of 1852, a Huddersfield inquest heard today.

Now artefacts found with the bones are likely to go on display in Holmfirth if an agreement can be reached between the firm which owns the mill and Holme Valley Civic Society.

Police launched a massive investigation at the site off Huddersfield Road after workmen uncovered two human bones while excavating in readiness for building work last May.

Task Force officers examined debris from the dam and discovered items including shoes, buttons, a ring with the name Annie inscribed on it and an 1852 penny.

Coroner Mr James Turnbull said it was arguable that an inquest was unnecessary, but he had decided to hold one because the find had caused considerable local interest.

He said: “It demonstrates the expertise of the investigating police and the lengths to which they can and do go in searching out possible crime or conducting investigations.”

Forensic pathologist Dr Michael Green said the remains were upper arm and upper leg bones aged between 50 and 100 years old, which probably belonged to a woman in her mid-thirties. Their age certainly made it possible that the bones belonged to a victim of the 1852 flood.

Dep-Supt Tony Ridley said that with the bones were found shoes dating from 50 to 200 years old, pieces of leather, a thimble, buttons from the Lancashire and Yorkshire Railway, which ceased operating in 1922, the ring and 97 other bone fragments belonging to animals.

He said: “These might be associated with the Holmfirth Flood of 1852 when the Bilberry Dam burst, killing between 80 and 90 people. Ten bodies were unaccounted for.”

Mr Turnbull thanked Mr Ridley and his men for their painstaking work.

And he added: “It is quite clear that it is possible the body became lodged in that area at the time of the flood — a flood which was a devastating affair.”

Mr Turnbull said that the civic society and Kirklees leisure services had both written asking permission to take possession of items found with the human remains for display to the public.

Mr Gareth Owen, for Hepworth Electrical Developments Ltd, who own the mill and former dam. Said the firm were claiming ownership of the items.

But he added: “Any items of interest to the appropriate historical body will be happily loaned permanently to them. I agree that Holmfirth is the appropriate place to exhibit them.”