The Huddersfield, Halifax & Bradford Union Railway was a proposed line announced in mid-June 1845:[1]

The object of this Line is to connect, by Railway, the important Manufacturing Towns of Huddersfield, Halifax, and Bradford. It will also, by its Junction with the Huddersfield and Sheffield Railway at Huddersfield, afford a direct Line of Railway Communication between the Metropolis and the Towns of Halifax and Bradford. 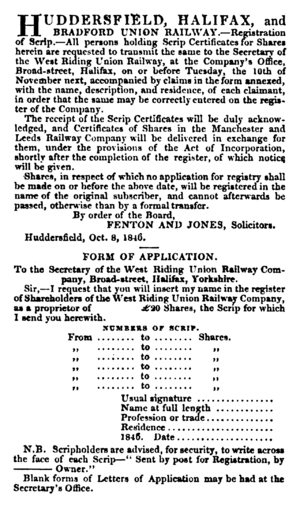 The Consulting Engineer was named as Joseph Locke (F.R.S.) and the Engineer was to be Alfred S. Jee. The provision committee was announced as comprising:[3]

By the end of June, the following more detailed description was published in the Leeds Times:

This projected Line of Railway is intended to complete the Chain of Railway Communication between the Metropolis and the important Manufacturing Districts of Yorkshire.

It will commence near to the proposed Station behind the George Inn, at Huddersfield, and proceed by way of Raistrick and Brighouse to Halifax and Bradford, so as to form two Junctions with one of the projected Lines between Halifax and Bradford, at such points as the Engineers now engaged may determine upon ; but in case neither of the said projects should receive the sanction of Parliament, then it is proposed to carry the present Line forward to Halifax and to. Bradford, by such route as may be found most practicable.

The primary object of this undertaking is to afford a direct route to the South for Halifax, Bradford, Shipley, Keighley, Skipton, Settle, Bingley, Wharfdale, Otley, Low Moor, Lightcliffe, Wyke, Northowram, Southowram, Brighouse, Raistrick, Elland, Salterhebble, and the vast population of those Districts.

By the proposed Line, the Huddersfield and Sheffield Junction, and the Sheffield and Manchester Railways, the route is direct to Sheffield, and from that town there are several Railways now before Parliament, which will open a direct communication with the Midland Railway to the South and Centre of England, and with Newark and Lincoln, and the Corn Districts, and with Great Grimsby or Gainsborough, and the Trent and Humber, to the East and South East.

Controversially, the directors of the scheme reduced the final number of public shares (from 15,000 to 7,500) by allocating shares to other railway companies. In what was a common, if dubious, practise at the time, some of those who had applied for shares began trading them straight away for profit — in this instance however, some subsequently discovered that their application had been rejected or the number of shares allotted reduced.

Together with the West Yorkshire Railway (WYR) and the Leeds & West Riding Junction Railway (L&WRJR), it was amalgamated into the West Riding Union Railway (WRUR) on 18 August 1846, which was then subsequently acquired by the Manchester & Leeds Railway (M&LR) on 17 November 1846.[4]

In 1874, a Parliamentary Bill with a similar name submitted by the Midland Railway (MR) was unsuccessful.

To commence at Huddersfield, passing through Rastrick and Brighouse to Halifax and Bradford, affording a direct communication between the Metropolis and the manufacturing districts of Yorkshire. Capital £300,000. 15,000 Shares of £20 each.