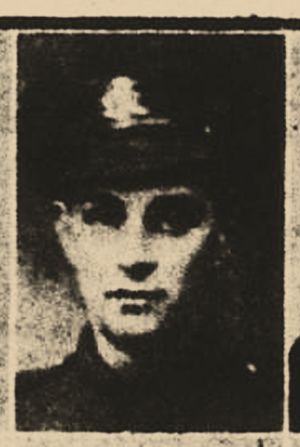 Hubert had attended the Church school on Holly Bank Road and the Huddersfield Higher Grade School.

In 1911, Hubert's father was described as an "Employer" so inevitably he employed his two sons. In fact he had been employing Norman since the boy was twelve years old. The Examiner later said "Hubert helped his dad in his painting and decorating business". He was a student at the Technical College, no doubt in connection with his learning a trade.

With five rooms, South View at 59 East Street was a relatively spacious house, with the two boys and two girls able to share separate bedrooms.

Florence, the oldest daughter then at home, worked as a machinist in an "underclothing works", probably Armistead's above a wool shop opposite the Zion Chapel on Lidget Street. Anne and Maud, who had left home by 1911, no doubt having married, were worsted weavers in 1901.

Such prosperity as they enjoyed did not spare them loss: two children had died before the 1911 census. Doris, aged 14, had left school but was not yet employed.

Joe William Crowther was from Fixby but married to Emily who was born in Cowcliffe, and the family had lived in Lindley at least since 1880 when Anne was born.

Hubert enlisted in the army on 20 March 1916, possibly after putting his name forward under the Derby Scheme or after being conscripted.

Another Lindley man, Horace Brook, had a service number close to Hubert's, which suggests they joined at about the same time. The 2/5th Battalion did not go to France until January 1917 after the introduction of conscription. Hubert was therefore probably not at the front for long before he was killed. He died at the start of the Battle of Bullecourt, in the third phase of the Arras offensive on the 3 May 1917. The Battalion was in its first big action and many men from the Huddersfield area were killed that day.

Hubert has no known grave and is remembered on the Arras Memorial and on the plaque in St. Stephen's and in the Methodist Church in East Street, not far from where he grew up, and also on the memorial in the churchyard at St. Phillip's, Birchencliffe.

CROWTHER, HUBERT. Corporal. No 241797. 2/5th Battalion Duke of Wellington's Regiment. Born 59 East Street, Lindley, 30.11.1891. Son of Florence E. Crowther and the late Joe William Crowther. Educated at Lindley Church of England School, Huddersfield Higher Grade School and Huddersfield Technical College. Worked in the family business as a painter and decorator. Single. Enlisted 20.3.1916. Wounded at the Battle of Bullecourt, 3.5.1917, aged died of his wounds on, 3.5.1917, aged 25 years. Has no known grave. Commemorated ARRAS MEMORIAL TO THE MISSING.