The former Holmfirth Technical Institute was opened in 1894 and is situated at the junction of Bridge Lane and Huddersfield Road in Holmfirth.

The building is now used as an adult education centre 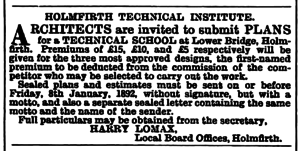 Planning for the institute began circa 1890, with an invitation to architects to "submit plans for a Technical School at Lower Bridge, Holmfirth" placed in local press in December 1891. The plot of land selected adjoined the police station on Bridge Lane.

A design by Joseph Smith of Sheffield and Holmfirth was selected and the foundation stone was laid on 16 July 1892.

James Marsden J.P. of Wigan, a former resident of Holmfirth, made total donations of £750 towards the estimated costs of around £4,000, with Swire Smith J.P. (representing the Honourable Company of Cloth Workers) donating a further £250.

The Marquis of Ripon had initially agreed to perform the opening ceremony on 11 May 1894, but had to withdraw at short notice due to ill-health. In his absence, the committee invited James Marsden to formally open the new institute.

The Leeds Mercury reported in August 1907 that the institute would be converted into a school and it was subsequently renamed the Holmfirth Technical Institute and Secondary School.[2]

In the early hours of Saturday 17 April 1937, a car driven by Albert Tinker of Holme Valley crashed into the barriers outside the institute.[3]

By the 1960s, the building had become a Further Education Centre.