Also known as the Whit Monday Flood, the flash flooding in the Holme Valley that occurred on 29 May 1944 claimed the lives of three Holmfirth residents.

The weather on Whit Monday 1944 had been exceptionally warm and sunny, and many had spent the Bank Holiday outdoors or taking part in traditional Whit Monday church events such as parades. However, by late afternoon storm clouds had begun to gather and a heavy cloudburst began at around 5:30pm in the hills to the west of Holmfirth. According to one eyewitness, "it came down as if a reservoir in the sky had opened" and torrential rain continued to fall for around 30 minutes as the storm passed eastwards.

Roads on the hillside were turned into miniature rivers and people living near the [River] Holme saw it begin to race and then rise alarmingly. High up the valley, Bilberry Reservoir, which serves an extensive catchment area, overflowed, and about 100 tons of earth on the outer side of the embankment was carried away by the water rushing down the hillsides.

The outlet of the reservoir had become blocked by debris, allowing the water levels to rise to the height of the embankment. However, unlike the Holmfirth Flood of 1852 when the Bilberry embankment failed, it held but was left in a weakened state.

13 miles to the southwest of Holmfirth, the heavy rains caused Glossop Brook to flood and local resident Mrs. Jane Ann Bridge was drowned.

According to eyewitnesses, the river level through Holmfirth rose rapidly about 6pm by around 5 feet. This was reportedly just 18 inches below the peak of the 1852 Flood.

The finishing room of Hinchliffe Mill in Austonley (in the occupation of Whiteley & Green Ltd.) was swept away and a machine weighing an estimated 6 to 8 tons was carried 200 yards downstream. Damage was also caused at the following mills:

The remainder of the worst damage occurred in the centre of Holmfirth around Victoria Bridge. A block containing building society offices and two shops, with residential flats above, collapsed. The only occupants were Miss Hilda Jackson and her widowed mother who, realising the risk, had left the building around 15 minutes prior to the collapse. The corner of a block containing bank premises and insurance offices also collapsed.

Families residing at Scarfold "were rescued by being pulled through holes cut in their bedroom roofs". This mode of rescue also occurred during the 1852 Flood.

Leading aircraftman Stanley Turton found himself trapped behind shops in Victoria Street and "escaped by scaling a 15ft fall pipe and climbing on to the roof tops".

At the Holme Valley Theatre (also known as the Picturedrome), projectionist William H. Hopkins[1] saw the rising river level outside and led theatregoers out of the back exit to safety. This was fortunate, as the bridge over the river at the front of the cinema was washed away shortly afterwards. 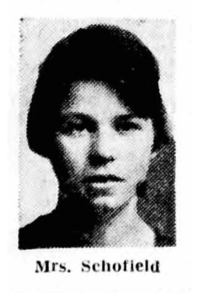 34-year-old Dorothea Schofield (née Hunter) was employed as a part-time clerk at motorbus proprietors Baddeley Brothers of Holmfirth and was working at the company's Hollowgate garage on the day. Together with fellow employee Lewis Hirst[2], she found herself stuck outside the garage by rising water and they "climbed on to a wall where they were marooned". When the wall collapsed, only Lewis was saved.

Elderly spinster Maude Evelyn Wimpenny of 51 Woodhead Road became trapped in her garden by rising water, perhaps having gone outside to watch the river in flood. Two of her near neighbours — Donald Riley and his teenage son Geoffrey — gave assistance but all were swept away. Only Geoffrey survived and was subsequently awarded the Albert Medal for gallantry in November 1944.

The National Civil Defence, who had primarily trained for emergencies arising from enemy attacks during Second World War, were quickly deployed and around "700 wardens, members of rescue teams, messengers, Home Guards and special constables" worked in conjunction with the National Fire Service (NFS) and regular police. Mobile kitchens were set up "to supply hot drinks and sandwiches to those helping to pump the water from houses, salvage furniture and other household goods, and restore vital services".

Where floodwaters had entered properties, residents had to deal with a "slimy mass" of thick mud covering furniture and possessions.

On the day after the flood, Regional Commander General Sir William Bartholomew[3] visited Holmfirth to view the damage.

Concerns about the safety of the Bilberry Reservoir embankment led to the upper stone blocks of the valve shaft being removed in order to reduce its height by 10 feet, allowing the reservoir's water level to drop more quickly.[4] A 24-hour watch was put in place, Army engineers laid a telephone line from the reservoir and broadcasting vans were placed on standby "to give the alarm if necessary". It was also reported that some residents in the Holme Valley were spending nights with relatives or friends on higher ground.[5]

The collapse of a section of Woodhead Road opposite the Victoria Inn severed the two mains water pipes — 18 inches and 15 inches in diameter — that connected Batley to Batley Corporation's reservoirs above Holmbridge. Fortunately this supply did not greatly add to the floodwaters as the main filter house at Brownhill Reservoir had an automatic valve which closed the supply when it detected the sudden change in pressure. Temporary pipes with a smaller diameter were installed to reconnect the supply and Batley Corporation also obtained emergency access to water from the Dewsbury & Heckmondwike Waterworks Board.

Plans for the Holmfirth & District Salute the Soldier Week, which was to have commenced on 3 June 1944, were cancelled and instead a distress fund was set up "to help in relieving some of the hardship caused to the victims". By the end of the month, the fund had reached over £12,000.

At a meeting held at Jackson Bridge on Saturday 1 July, Huddersfield architect Norman Culley proposed "building a boating lake in the centre of the town" that could hold excess water during floods.[6]

The formal deadline for making claims against the relief fund was Wednesday 5 July, although the Yorkshire Post reported that only 65 out of the 110 families whose homes had been damaged by the flood had applied.[7]

On the evening of 12 July, 80 mothers and children evacuated from London arrived at Holmfirth, which raised concerns about "the housing shortage that [had] been made more acute by the recent floods".[8]

By mid-July, Holmfirth Urban Council had made a decision to gift £250 to the widow of Donald Riley.[9]

By early August, the relief fund had exceeded £18,000, although over a dozen local authorities were barred from contributing by the Ministry of Health.[10]

The fund eventually raised £22,794 out of which around £22,023 was paid out. It was proposed to use the rest to repair "a stretch of river wall" with any remainder to be gifted to the Holmfirth Almshouses.[11]

Muriel Mary Butterworth of Honley, one of the leaders in the relief work after the flood, was awarded the M.B.E. (Civil Division) in 1945 in recognition of her public services.[12] 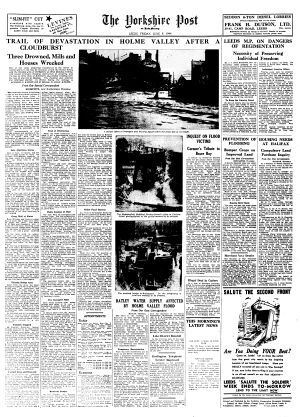 During the Second World War, newspaper editors operated under Defence Notices which restricted reporting on certain topics, including those that might damage British morale. Although it is sometimes suggested that newspapers were initially barred from reporting on the flood, many national and regional titles carried news of the three deaths in issues published on 30 and 31 May, including details of the Rileys' attempt to save Miss Wimpenny. Although not explicit, some articles implied that the river was in flood at the time.

With the ongoing concerns over the safety of the Bilberry Reservoir, authorities may have been keen to limit any reporting that might make the weakened embankment a target for German bombers. More severe temporary reporting restrictions may also have been in place during the lead up to Operation Overlord and the Allied invasion of Normandy that was initially scheduled for 5 June.

By 5 June, newspapers were reporting more detailed accounts of the cloudburst and flooding, including plans for evacuations should the embankment fail. This coincided with work by Army engineers to lower the reservoir's waste pipe by around 10 feet, which allowed the water levels to be safely lowered.

On Friday 9 June, Yorkshire newspapers carried full and in-depth reports of the flooding which included photographs of the damage caused in Holmfirth.

A detailed summary of the flood, based on a report by Holmfirth Urban District Council's clerk Sydney G. Dilnot, was included in The Holme Valley Almanack and Year Book (1947).