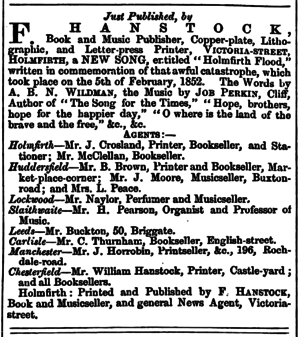 Joe Perkin, now best remembered as the arranger of "Pratty Flowers", was living at Cliff in Wooldale at the time of the Holmfirth Flood of 1852 and would have witnessed the aftermath first-hand.

In November 1852, advertisements began to appear for a new composition by Perkin:[1]

Just Published by F. HANSTOCK, Book and Music Publisher, Copper-plate, Lithographic, and Letter-press Printer, Victoria Street, Holmfirth, a NEW SONG, entitled "Holmfirth Flood," written in commemoration of that awful catastrophe, which took place on the 5th of February, 1852. The Words by A. B. N. Wildman, the Music by Job Perkin, Cliff, Author of "The Song for the Times," "Hope, brothers, hope for the happier day," "O where is the land of the brave and the free," &c., &c.

"A. B. N. Wildman" was Abraham Wildman (1803-1870), a now largely forgotten poet who was born in Keighley and campaigned against the mistreatment of children in mills alongside Richard Oastler. He worked at Judson and Brother's Mill, Keighley, and gave evidence of the cruel way in which child workers were treated.[2] In later life, following his wife's death in 1868, he was reduced to poverty and would likely have died in misery if not for his friends, who made an urgent appeal for charity. When Sir Titus Salt heard of Wildman's plight, he immediately arranged for him to be moved into one of the Almshouse in Saltaire and be given a weekly allowance. He died on 13 March 1870, aged 69.[3]

Following Joe Perkin's death in 1868, his widow Eliza spent her final years in the Holmfirth Almshouses which were built in 1856 to commemorate the flood. Their son, Mendelssohn Perkin, who became an itinerant musician in later life, also spent time living in the Almshouses.

It rushed down the hill when people lay still,
Rolling and roaring like thunder;
It came in its might like a demon at night,
And left the survivors in wonder.
It bore its course a battle field force,
defying what stood in its way;
It recognised none, but travelled along,
Like a giant in fearful array.

It hurried along the weak and the strong,
And crushed all around in its power;
It rushed down the hill, took village and mill,
The garden, the cottage, and bower.
It rolled through the glen, hurried women and men,
Whilst peaceful and happy in slumber;
It wrecked up the dead from their cold, cheerless bed,
And its victims were lost in great number.

It left thousands of sighs beneath the cold skies,
Heart-burnings of trouble and sorrow;
But it never can cope with the Angel of Hope,
In a peaceful and joyful to-morrow.
Alas! there were those who never felt care,
Such slumbers had sealed up their eyes;
Ere morning awoke, all pleasures were broke.
And sorrows made deeper with sighs.

For there rolled the father, and there passed the mother,
Both hurried along in the wave;
And thence shrieked the sister whilst pass’d by the brother,
Engulfed in a watery grave.
The babe at the breast, the mother at rest,
The lovers which parted at night,
No more will they gather from mother or father,
The joys of a home or delight.

They are gone to their doom, alas! a cold home,
Few kindred amongst them were found
To follow the bier, or shed the sad tear
At the grave where afflictions abound.
Come, Charity, lend, for thou art a friend
Which soothes down man’s sorrows and griefs;
Come forth with thy power, for now is the hour
To aid and assist with relief.

A copy of Perkin's original arrangement was not located during research. However, a 1909 re-arrangement by George Wadsworth was found and is reproduced below.

Wadsworth was a Holmfirth stone mason and sculptor who was born in Cartworth and later lived in Upperthong.[4] His stone mason father, also named George, was a well-known local musician and member of the Holmfirth Old Brass Band, and the younger George followed in his footsteps. In later life, he regularly acted as a judge at music competitions throughout the country