"Pratty Flowers" — also known as "The Holmfirth Anthem" — is a choral folk song associated with the area around Holmfirth. The title is a play on the local pronunciation of the word "pretty". 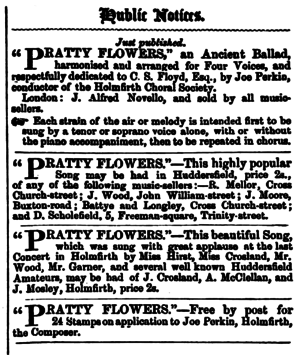 Joe Perkin, a Holmfirth choir master, arranged the song for four-part harmony at the request of the Holmfirth Choral Society circa 1857, basing it on an earlier local glee allegedly written in the 1840s[1] or on an older slip-ballad — Perkin simply noted it was based on an "ancient ballad". The arrangement was dedicated to C.S. Floyd, then then president of the society, who paid for the sheet music to be printed.[2] It is also claimed that Holmfirth Choral Society member Henry Pogson assisted but modestly refused to be credited on the sheet music.

An alternative theory first raised in 1946 was that the original version was written around 1812 as a patriotic song to encourage local men to join the army and fight Napoleon. According to the Rev. A.T. Dangerfield, vicar of Holmfirth in the 1940s, he had found a curious entry in the baptismal register relating to baptism of "James, son of John and Elizabeth Lockwood" with the father absent. A note stated that John was abroad, fighting in Spain, and Dangerfield believed this explained the line "Wilt thou go fight yon French and Spaniards?" John Lockwood eventually returned home and James was formally baptised on 4 April 1813.[3]

According to a possibly apocryphal story, at a concert held at Huddersfield Town Hall, "a Holmfirth choir" were called upon to sing the National Anthem. Instead of singing "God Save the Queen", the choir gave a rendition of "Pratty Flowers" and the nickname of "The Holmfirth Anthem" was established. In Philip Charlesworth's 1991 article about Perkin (reprinted in the Old West Riding journal), he suggests that the singing of "Pratty Flowers" was "not a display of rural ignorance" but rather a reflection of the "period in [Queen] Victoria's long reign when she and the monarchy became very unpopular."

In January 1892, the Chronicle reported on a "gathering of old folk" in Almondbury, where the evening's entertainment included the local church choir, who sang a number of glees, including the "Holmfirth Anthem":[4]

This item delighted the old folk, and one of them was heard to remark to a young man ... "Ah lad ; I yerd that sung befoore tha' wor' born."

In an interview published in the Huddersfield Daily Examiner in 1914, 70-year-old Sydney Sykes, who knew Perkin, stated that the conductor has been commissioned "to write a good swinging chorus for the social gatherings of the musical community at Holmfirth" and that Perkin's "utilised a chorus that was then popular in the taverns of Holmfirth neighbourhood, and set it to music." Sykes claimed that "the words were a ditty that had come down — perhaps 200 years — when this country was at war with France or Spain."[5]

The Holme Valley Choir famously sang the "Pratty Flowers" at the Queen's Hall, London, winning the song wider fame. According to a later press report, amongst the London audience, who were resplendent in formal evening dress, was one visiting Yorkshireman who loudly demanded they perform "Th' Anthem!" The conductor, Mr. Silverman, politely declined, but the Yorkshireman persisted and the song was performed, much to the delight of the audience.[6]

Newspaper articles indicate that the song was regularly performed at local concerts and meetings, particularly in the 1890s where it appears to have had a resurgence. Local sports teams would apparently often sing it whilst touring abroad.[7]

The text varies slightly by version, but the original version is reportedly:

Abroad for pleasure as I was a-walking
It was one summer, summer's evening clear
O, there I beheld a most beautiful damsel
Lamenting for her shepherd dear
Lamenting for her shepherd dear
Dearest evening that e'er I beheld thee
Was ever ever more with the lass I adore
Wilt thou go fight yon French and Spaniards?
Wilt thou leave me thus, my dear?
Wilt thou leave me thus my dear?
No more to yon green banks will I take thee
With pleasure for to rest thyself and view the lands
But I will take thee to yon green garden
Where the pratty flowers grow
Where the pratty, pratty flowers grow