The picturesque Holme Styes Reservoir is situated south of Holmfirth and is the source of the River Ribble.

It is fed from the south-west by Reynard Clough and, together with the nearby Boshaw Whams Reservoir, was built around 1840 to provide a reliable water supply for nearby mills.

The reservoir is supplied by Reynard Clough, Hades Clough and Long Ing Dike. 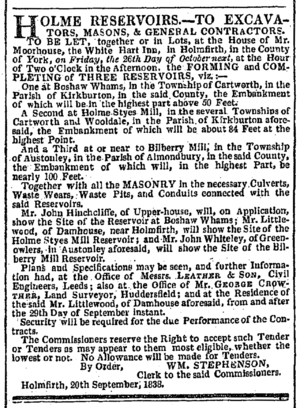 Public notices for tendering to build the reservoir — along with Boshaw Whams and Bilberry — appeared in newspapers during September and October 1838.[1]

Following the Holmfirth Flood of 1852, when the embankment of the Bilberry Reservoir failed, concerns were raised about the state of Holme Styes and efforts to recover the bodies of the victims were hampered when a false rumour spread that Holme Styes was also about to burst.[3] To alleviate concerns, local magistrates ordered the water level to be dropped from 75 feet to 40 feet.[4]

A meeting was held at the Town Hall on Friday 5 March 1852 at which it was resolved:

That in consideration of the recent statements concerning the Holme Styes Reservoir, this meeting resolves to petition parliament to take immediate steps to secure us against danger in future, and to make the commissioners responsible in law as they are in fact.[5]

Engineer J.F. Bateman of Manchester was employed to inspect the state of Holme Styes and Boshaw Whams, and his report of 16 April 1852 concluded that both needed urgent remedial work: "...Holme Styes Reservoir is in a very unsatisfactory condition, and I consider it unfit to be filled with water until it be thoroughly repaired, although I apprehend no danger from its being occasionally filled, as it must be during heavy floods to a depth of thirty or forty feet."[6] Bateman later estimated that the repairs to Holme Styes would cost "upwards of £2,000".[7]

Repairs were apparently not carried out until 1857, when it was reported that Bateman had been instructed "to prepare drawings and specifications for the purpose of having this leaky and insecure reservoir put into a good state of repair."[8] The repairs meant that Holme Styes could not be used to store water during heavy storms in August 1857, which resulted in flood damage at Hepworth and Jackson Bridge.[9]

The body of delver William Henry Sykes (aged 34) was found in the reservoir in August 1874. At the inquest, it was reported that he was "much addicted to drinking, and he had been on the spree nearly a month". A verdict of "temporary insanity" was returned for the apparent suicide.[10]

In 1887, a rumour spread that the Dewsbury Corporation wished to purchase all of the reservoirs in the Holmfirth area in order to "increase the water supply of that borough."[11]

On the afternoon of Saturday 22 February 1896, labourer Herbert Beaumont (aged 18) was working near the side of the reservoir when he discovered "a gentleman's dark grey mixture overcoat and a black silk umbrella." By the following day, the items had been identified as belonging to 51-year-old John Ralph Cuthbert, a deacon at the Paddock Congregational Chapel who had been reported missing by his son in-mid January. Cuthbert had allegedly, for some time, been sending "anonymous letters making immoral proposals, and containing indecent sketches and suggestions" to a young woman. She alerted the police who then lured the writer into a meeting on 16 January where he was duly arrested, but then released pending an investigation.

The reservoir was dragged and Cuthbert's body was found on the afternoon of 24 February. Curiously, his legs had been bound with thick twine and his hands tied behind his back with a slip knot. At the inquest, it was speculated that the deceased had used the twine to ensure he drowned himself, as he was known to be a strong swimmer. A verdict of "found drowned in Holmestyes Reservoir without mark of violence, and had drowned himself, but there was no evidence to show the state of mind at the time" was returned.[12]

The body of Fred Morton (also known as Fred Green) was recovered from Holme Styes in late March 1892. He had been missing since 11 February that year and the police had reportedly dragged the reservoir several times before eventually finding his body. At the inquest, a relative stated that Morton had been in low spirits and, whilst they'd been out walking together in Hepworth, Morton had given him the slip and "he never saw him alive again". A verdict of "deceased had drowned himself whilst in an unsound state of mind" was recorded.[13]

The plans to build Digley Reservoir in the 1930s resulted in the Huddersfield Corporation purchasing all three reservoirs owned by the Holme Valley Waterworks Company.[14]