History of the Meltham Industrial Co-operative Trading Society Limited: Jubilee 1861-1911 (1911) by A. Haigh

On January 27th, 1872, an interesting event took place, which stands out unique in the whole history of the Society, nothing of the same character having occurred either before or since. Mr. John C. Hirst had completed ten years’ service as President of the Society. He had ungrudgingly devoted his time and worked with great zeal in the interests of the Society and the members generally. In recognition of these valued services the members subscribed for, and presented Mr. Hirst with, a valuable timepiece, which bore the following inscription:—

Presented to Mr. John C. Hirst by the members of the Meltham Co-operative Trading Society, as a mark of esteem for his untiring exertions as President during a period of ten years.
Meltham, January 27th, 1872.

No other event of importance took place during this year. Steady progress continued to be made, and the December report showed the membership to have reached 328. The sales had increased to £12,218 1s. 9d., which averaged £13 per member for the half year, the dividends 2s. 3d. per £ on grocery and drapery sales, and 1s. 4d. per £1 on corn sales.

From the year 1872 to 1879 there is nothing on record to show, with the exception of increased membership, what took place during that period. It would be about the year 1875 that Mr. John C. Hirst retired from the presidency, and Mr. Joseph Hirst ceased to be Secretary. It would also be about this time that Mr. John A. Wood retired from the Committee, and a little later Mr. William Haigh gave up the office of Treasurer. With the retirement of these gentlemen none of the original officials remained; others had been appointed to carry on the work, with its ever-increasing responsibilities, and, in perusing the balance sheet for the half year ending December, 1879, we find that a new order of things had been instituted. 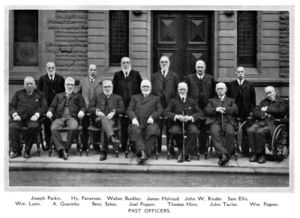 We cannot pass on without a word of praise and admiration for the men who had for so long a period sacrificed their time and labours for the benefit of the Society and their fellow-men. We, who to-day are to a certain extent reaping the benefit of their labours, owe to them a debt of gratitude, and we hope that in future years whilst resting upon their laurels they would partially, at any rate, be recompensed by seeing the Society grow and flourish.

In the December balance sheet, 1879, we find that the Society had become a member of the Co-operative Wholesale Society, and had invested there £200 of share capital. This Society commenced business in 1864 as the North of England Co-operative Wholesale Industrial and Provident Society Limited, with offices at 3, Cooper Street, Manchester, and was established as a wholesale purchasing centre for the whole of the Retail Societies in the United Kingdom who wished to join. There is no need to state here that this investment proved a profitable one.

On October 27th, 1879, it was decided to subscribe two guineas to the Central Co-operative Board. This Board came into existence for the purpose of carrying on the educational and propaganda work of the whole movement, and to give legal advice to all Societies when required.

At the Half-yearly Meeting held on July 7th, 1879, it was decided to subscribe three guineas annually to the Huddersfield Infirmary. It was also on January 6th of this year that a half-day holiday was instituted, a resolution being passed that the Stores be closed at 12 o’clock noon on Wednesdays until further notice. Also at this meeting, which was a Half-yearly General Meeting, the following arbitrators were appointed:— Messrs. T. A. Haigh, J. Kilburn, and D. A. Bamford.

The Committee at this time were as follows:— President, Mr. John Wilkinson; Secretary, Mr. Thomas Hirst; Treasurer, Mr. Charles Hirst; Committee, Messrs. Charles Pogson, David Patterson, Ben Sykes, James Hirst, Wright Thorpe, Walter Buckley, Dan Holroyd, and John Broadhead. The membership had increased to 525, the sales to £20,400, and by some manipulation in the adjusting of profits the dividend had gone up to 4s. per £ on grocery and drapery and 1s. 10d. per £ on corn and coal sales.

It was during this year (1879) that Mr. Hamer Hirst, who had been Manager for about fourteen years, retired, and Mr. Joe Haigh, who had been assistant for eight years, was appointed as his successor. Mr. Hirst had proved a good Manager, and had done excellent work for the Society, which was much appreciated by the members generally.

A regrettable circumstance occurred on February 10th, 1880, in the death of Mr. John A. Wood (Greenbottom). As mentioned previously, this gentleman had served in the capacity of Committee-man for close upon fifteen years. He had been an ardent and sincere worker, and the Society lost a valued supporter. He was one of the forty members who joined the Society at the initiative meeting held at Royd Edge Mills in 1861, and his widow, Mrs. Ann Wood, Carlile Terrace, still retains the membership. She is a most loyal member, and we hope she will be spared to take part in the Jubilee celebrations.

Co-operation in production was at this time only in its infancy. Many productive works had been commenced in various parts of the country, but had failed through lack of capital and mismanagement. Much attention was being given to this side of the movement by the Committee and many of the members. At the General Meeting held in the Oddfellows’ Hall on January 5th, 1880, it was moved by Mr. Benjamin Brown, and seconded by Mr. Jonathan Woodhouse, “That this Society join the Sowerby Bridge Flour Society.” This motion was carried, and £25 of share capital was forwarded. This venture, again, proved to be a good investment.

It would appear from a resolution passed at the General Meeting held on July 5th, 1880, that some agitation was taking place relating to the imposition of the income tax upon Co-operative Societies. The motion, which was moved by Mr. W. Garnett, and seconded by Mr. Samuel Coldwell, read thus:—

That a Special General Meeting be called when necessary to decide as to what shall be done respecting the new Income Tax Bill.

A resolution passed on December 6th: “That James W. Taylor load no more coal for the Society without the Committee’s authority,” brings to remembrance a well-known character, more familiarly known as “Jim o’ Abb’s,” cab proprietor and general carrier. He was a distinct personality and of genial disposition, quaint in his remarks, and a ready wit which made him notorious with both young and old. Unfortunately, fourteen years after this, he was one of those injured in the Sefton Mill disaster, which occurred on November 8th, 1894. The injuries he received were of such a severe nature that he never recovered from them.

The introduction of the Co-operative News to the members of the Society took place on Saturday, March 26th, it being decided to purchase twenty copies for that week and twenty copies weekly until further notice. 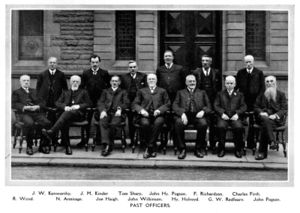 Since the opening of the new premises in 1869 the only means of acquiring warmth had been by having stoves in the different departments. This method was quite inadequate, and, as the winter months of 1881 were approaching, the question of warming the whole of the premises by more modern methods occupied the attention of the Committee, and on October 10th it was decided that a warming apparatus be put into the Stores immediately. Tenders were asked for from different firms, and Messrs. W. & S. Thornton (Huddersfield) were successful in getting the work of fixing the apparatus in a satisfactory manner and in accordance with the plans and specifications for the sum of £49 10s. Before the end of December the work was completed, and the half-yearly report of December 10th referring to it says—

Considerable expense has been incurred in the new warming apparatus, which renders the Stores more comfortable, and at the same time will ensure a better preservation of the stocks.

This brings us to the close of the first twenty years of the Society’s existence. With the exception of the Butchering Department, success had attended the whole operations of the Society from its commencement. Whether from mismanagement or some other cause, the butchering business was abandoned about the year 1875. Happily this failure had no deterrent effect upon the other branches of business, special mention being made in the Committee’s report to the Coal Department, and thanking the members for their loyalty, 888 tons of coal having been sold during the six months to not quite 400 members.

The following table shows the progress of the Society for the ten years:—

Pages with Public Domain content
This page was last modified on 7 June 2019 and has been edited by Dave Pattern.