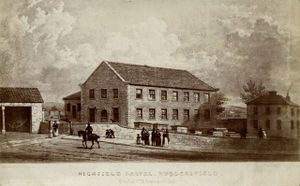 The original Highfield Chapel was built in 1771 at a cost of £827 and opened at the start of 1772. It was the first Dissenters' church to be built in the town

In 1843 it was taken down and replaced by the current building at a cost of around £7,000. During the rebuild, the congregation worshipped at the Independent Chapel on Ramsden Street.[2] By August 1843, the Leeds Mercury reported that the carpenters had laid the floor of the new gallery.[3]

In more recent years, the former chapel was converted into a set of apartment flats.

NEW NORTH ROAD (North Side). Highfield. Highfield United Reformed Church. Mid C19. Ashlar. Hipped slate roof. Two storeys. Moulded eaves cornice and blocking course. Five bays of which end two break forward, and are framed by giant Tuscan pilasters and giant Ionic columns, on high plinths taking full entablature and massive parapets, each with four piers and pedimented centre, slightly broken back. These bays frame large panelled doors in moulded frames with segmental pediments, and above them one panel each, with moulded and shouldered frames. Central three bays have sashes with glazing bars, vertically linked in giant round- arched surrounds with moulded frames, and separated by moulded panels. Side elevations have similar giant round-arched windows, the 1st on each side continuous (ie without panels), the next three with plainer frames.

Buildings | Churches and places of worship | Listed buildings and monuments
This page was last modified on 8 March 2022, at 22:34.