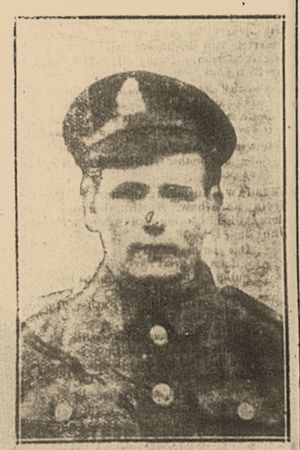 By 1911, the family was residing at Folly Farm, Hade Edge. Aged 14, Herbert Kaye was recorded as a "mill hand" at a woollen mill in the census.

He possibly enlisted as Herbert Kaye, dropping the surname Robinson.

KAYE, HERBERT. Private. No 241370. 1/4th Battalion Duke of Wellington's Regiment. Born Hade Edge, Holmfirth. Son of Mr and Mrs H. Kaye, Folly Farm, Hade Edge. Educated Hade Edge Council School. Employed at Washpit Mills, Holmfirth. Enlisted during the latter part of 1915 and trained at Clipstone Camp. Embarked for France in May, 1916. Suffered from trench feet but returned to his Regiment after seven weeks. Was gassed in September, 1916. Invalided to England with Enteric Fever in January, 1918. Returned to France in April, 1918. Suffered a serious gunshot wound to the neck a fortnight later. Died of wounds at No 8 British Red Cross Hospital, 1.5.1918. Buried BOULOGNE EASTERN CEMETERY. Grave location:- Plot 9, Row B, Grave 11.

4th Battalion, Duke of Wellington's Regiment | Huddersfield and District Roll of Honour | Kaye (surname) | People
This page was last modified on 17 May 2020, at 11:14.