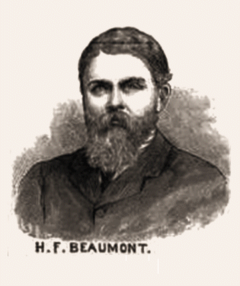 Henry Frederick Beaumont was a British Liberal and Liberal Unionist politician, and owner of the Whitley Beaumont estate.

He was educated at Eton and Trinity College, Cambridge, and later became a Member of Parliament for the West Riding of Yorkshire South (1865-1874) and for Colne Valley (1885-1892).

In 1857 he married Maria Johanna Garthorpe (c.1835-1925) and they had 10 children. They lived at Whitley Hall on the Whitley Beaumont estate, which was an inheritance from Richard Henry Beaumont, and also at Crosland Hall, South Crosland.

On 19 October 1894, Beaumont was awarded the Freedom of the Borough by the Mayor, Alderman J.J. Brook.[1]

In 1879, he instructed his agent to make an offer to 30 acres of Crosland Moor to the Huddersfield Corporation for the purposes of creating the first public park in Huddersfield. After concerns were raised about the suitability of the land, the offer was changed to around 25 acres of Dungeon Wood near Lockwood and work began on creating Beaumont Park

Maria Johanna Beaumont cut the ceremonial first sod of Beaumont Park on 29 May 1880 and the park was formally opened by the Duke and Duchess of Albany on 13 October 1883.

Beaumont (surname) | People | People connected to South Crosland and Netherton
This page was last modified on 22 February 2020, at 19:32.