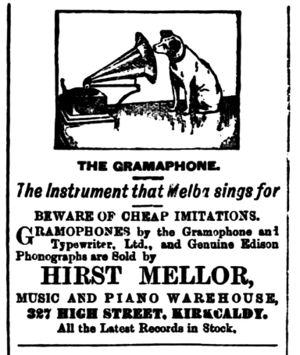 Haydn Mellor[1] was born on 28 May 1898, the son of Hirst Mellor of Linthwaite and his wife Mary Jane (née Crossland). He was baptised on 23 July 1899 at St. Bartholomew, Meltham, and his father's profession was recorded as "professor of music".[2]

By the late 1890s, the Mellor family had moved to Kirkcaldy, Scotland, but appear to have occasionally returned to Meltham.[3] By 1904, Hirst Mellor ran a shop where he sold violins and also "gramaphone and phonograph instruments and records, of which class of goods he holds a large and varies stock".[4]

Prior to the First World War, Haydn had returned to Huddersfield and served as an apprentice organ builder at Peter Conacher & Co. Ltd.

He married Florence Blackburn in 1917 at Dewsbury.

He enlisted with the Black Watch but was later attached to the 8th/10th Battalion of the Gordon Highlanders. He arrived in France on 6 April 1918 and was killed a fortnight later on 20 April after being struck "on the heart and leg by bursting shrapnel".[5] He is commemorated on Meltham War Memorial.

His rank is reported as "Private" in modern records but was given as "Lance-Corporal" or "Corporal" in contemporary newspaper reports of his death.

Black Watch (Royal Highlanders) | Gordon Highlanders | Huddersfield and District Roll of Honour | Mellor (surname) | People
This page was last modified on 17 May 2020, at 11:16.