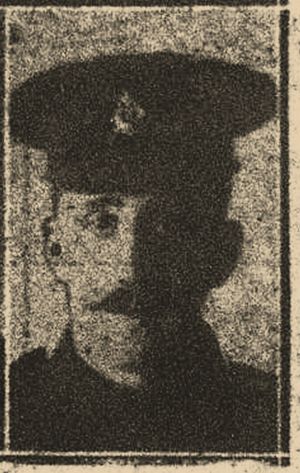 Harry Wilkinson, who lived with his wife Annie, in Temple Street, Lindley, was one of 19 R.A.M.C. men who died when their hospital ship HMHS Galeka was returning empty to France and struck a mine off Le Havre on 28 October 1916. He was 31 years old.

The Wilkinson family had lived in the greater Lindley area for some time: Harry's father Hyde was born in Outlane in 1862 and his father, Mark, came from Longwood. Mark and Hyde were both joiners.

Hyde married Harriet Ann Holt of Brian Street, Lindley at the High Street Chapel in Huddersfield on 4 April 1885, both could sign their name. Harry was born on 18 October 1886.

In 1891 the family were living at 49 Thornhill Street[1] in the centre of Lindley. By this time there were three more children: Frank who was born in 1888, Alice, born 1890, and Dora who was 4 months old at the time of the census and baptise on 8 May 1891 at the Zion Church. The family home consisted of three rooms. At this time he attended Oakes Council School.

In April 1890, Harry was enrolled in the Zion Sunday School for three years. He was deemed to have left through "non-attendance" in April 1893. Harry’s brother Frank was also a member of the Sunday School and was deemed to have left to "Go to Sheffield". This would have been because the family moved, temporarily, to Sheffield, where another child, Nellie, was born in 1894. This move was probably for Hyde to find work. Harry was re-admitted on 14 October 1898 when his "father" was given as John William Holt of 34 Brian Street. This simple error suggests Harry returned to Lindley before the rest of the family and lived with his grandfather.

By 1901, the whole family had moved back to Lindley and were living with Harriet's seventy-one-year-old father in four rooms Brian Street. Frank was also re-admitted to the Sunday School at that time and stayed on the register until 1913.

Like his grandfather, Harry, who was 15 in 1901, worked as a cloth finisher. It seems he continued with his Sunday school attendance.

At the end of 1910, Harry married Annie, the daughter of Soloman Pitchforth, a weaver, who was a neighbour, living at 48 Brian Street. By April 1911, the couple were living in a two-roomed house, 13 Temple Street, close to the chapel and Sunday School Harry had attended. Harry was by then working as a weaver at Wellington Mills on Plover Road and continued as a member of the Zion Church. A daughter, Eva, was born in early 1912.

Hyde and Harriet Wilkinson and the rest of the family were by then, living at 19 George Street. With three adult daughters and one son, the four rooms must have seemed very crowded. However, Frank married Ruth Wilson of Cowrakes Road, in July 1915 at the Zion Church and would then have moved out of the family home.

Towards the end of 1913, Harry and Annie had a son, christened Frank.

Harry enlisted on 12 May 1915 and was on active service by August 1915. He may have joined the Medical Corps for religious reasons, though we cannot know for sure. Serving in a military hospital in Malta when casualties from the war in the middle east were treated, Harry wrote a letter to the Huddersfield Examiner which was published on July 14, 1915: "We don't see the actual fighting here but, God knows, we see the terrible results ... and terrible they are. It’s a miracle how some of them live."

HMHS Galeka, which had previously served in Gallipoli, struck a mine and sank on the 28 October 1916 and Harry's body was never recovered. He is remembered on the memorial in St. Stephen's church and also by name, on the memorial for those lost on the Galeka and Salta hospital ships in the Ste Marie Cemetery, Le Havre.

Harry was named on the Zion Church memorial where he attended and the Sunday School register records he was "Missing at sea. RAMC English Channel".

However, the register of burials includes Harry's name for the plot: this cannot be — his body was never found; it may mean his name was added to the family stone, now long lost.

Hyde Wilkinson died soon after his son, in 1917. Harry's brother, Frank, died in 1920 and is buried with his father. Their mother, Harriet, died in 1933 and is also buried there. Harry and Annie’s son Frank was living in Fife, Scotland, when he died aged 25 in June 1937. He was brought back to Lindley to be buried in the graveyard of the chapel in East Street.