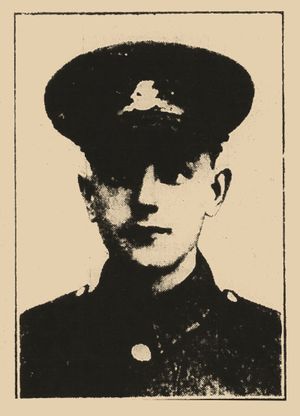 In 1911, Harry Taylor lived with his widowed mother, Martha Ann, who was fifty-six years old and had been born in Meltham, his brother Charles, 31, a cloth finisher, and sister Maud aged 14, who worked as a twisting frame tenter. Harry was nineteen years old, born 9 June 1891, and was employed as a piecer; later, he worked as a teamer with a Milnsbridge chemical firm, J. W. Leech & Co.

The family lived at 15 Zion Square; this group of houses, just off East Street and long demolished, was owned by one Thomas Helliwell and his daughter Fanny, who also owned properties in East Street and Birchencliffe Road. The houses varied in size but that occupied by the Taylor family had only three rooms.

Martha Taylor did not fully understand the questions on the census form: as well as those living with her we learn that her husband was William Edward Taylor[1], she had another son, George, who was born in about 1877, and daughters Hannah, born in 1881, and Emily, born in 1888. All had married and left home. In addition, a fourth daughter, Ann, probably born around 1880, had died.

In 1901 the family lived on the New Hey Road, on the corner with Dean Street, not far from Wellington Mills, the area's largest employer and possibly where William worked as a weaver and all the children old enough were in work. At that time Harry attended Oakes Board School on Wellington Street. It seems likely that widowhood forced Martha to move to a smaller house.

Margaret Stansfield writes that Harry joined the army on 3 February 1910. In fact, Harry joined the Special Reserve — locally, the 3rd Battalion of the Dukes. The S.R. began their enlistment with six months full time training on army pay then completed 3-4 weeks paid training per year for six years. Harry had only been back from his annual camp when he was called back to join the 2nd Battalion. His number was enlarged with the addition of 31 to the original 9629.

This battalion landed at Le Havre on 16 August 1914, having been at Dublin when the war began. Harry arrived in France on 8 September.

Harry died on 13 October, just weeks after arriving in France. He was killed during the Battle of Le Bassee. His body was probably never found as he is remembered only on the memorial in the Le Touret Cemetery. He was twenty-three years old.

A report of Harry's death was in the Huddersfield Examiner on Friday 20 November and a memorial service was held the following Sunday, at St. Stephen's, which makes it all the more curious that Harry's name does not feature on the memorial in the church.

TAYLOR, HARRY. Private. No 319629. 2nd Battalion Duke of Wellington's Regiment. Born Marsh 9.6.1891. Son of the late Charles E Taylor and Mrs Martha Taylor, 15 Zion Square, Lindley. Educated Oakes Board School. Employed as a teamer by Messrs J. W. Leech and Company, chemical manufacturers, of Milnsbridge. Single. Enlisted 3.2.1910. Had only been home from the annual training a fortnight when he was called upon to rejoin his Regiment. He embarked for France on 14.8.1914. Killed in action at Annequin on 13.10.1914, aged 23. Has no known grave. Commemorated LE TOURET MEMORIAL TO THE MISSING.

2nd Battalion, Duke of Wellington's Regiment | Huddersfield and District Roll of Honour | Lindley Roll of Honour | People | Taylor (surname)
This page was last modified on 17 May 2020, at 11:15.