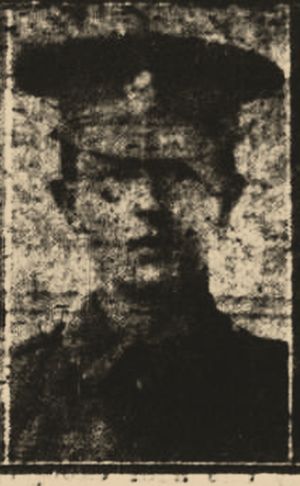 Harry Rawcliffe was one of the few Lindley men who served in the Gallipoli campaign against the Turks. John Priestley of West Street, who died was also there. The 8th Battalion was the only West Riding battalion to be sent to that theatre of war, landing at Sulva Bay on 7 July 1915

Harry, born on 8 March 1894, was baptized at St. Stephen's church a week after George and Hubert Dyson on 29 July. He was the first child of Samuel Robert Rawcliffe and his wife Ellen who were both thirty-five when Harry was born. They had three more children: James, born in 1896, Samuel, born 1898 and Elsie who was born in 1900.

According to information in the 1901 census Samuel and Ellen both came from Meltham Mills, where Samuel's father dispensed medicines, but were living in Urmston, six miles south west of Manchester in the 1890s, when the children were born. Samuel was a shopkeeper selling hosiery.

When Harry was christened in 1894, Urmston was given as the family's address in St. Stephen's register. Presumably they were visiting relatives on this side of the Pennines and the service was a family celebration.

Harry attended the Urmston Higher Grade School, but the family must have lived, at least temporarily in Birmingham because Harry went to school there too.

Samuel died in 1903 and this must have lead to Ellen returning to the Huddersfield area because by 1911, she and the children were living in Ing Terrace, 255 New Hey Road. The house had four rooms, which suggests that mother and daughter shared one bedroom and the three boys the other.

Harry and James were both warehousemen in a wool warehouse while 13 year-old Samuel Jnr and Elsie who was eleven, were both still at school. The wages of the two working lads cannot have been particularly good: "warehouseman" sounds unskilled and may have merely been a first job in the industry for a lad newly out of school, or even one four or five years out of school in James' case. The family budget must have been difficult to manage with five mouths to feed and only two incomes.

By the time he enlisted, Harry was working as a warehouseman for Messrs. Fisher & Co. of Upperhead Row in the town centre.

We have no surviving service record for Harry though we know he enlisted on 21 August 1914, in the first days of the war, and not in the Territorial Force. He would have had his medical in Halifax. In April 1915 the battalion moved from Grantham to Witley. In July the unit sailed from Liverpool to the Mediterranean. His Medal Index Card has him arriving in the Balkans on 7 July 1915. The battalion sailed on to Turkey, landing 7 August.

Harry was reported wounded and missing on 21 August 1915 and later presumed to have died that day. He has no known grave and is remembered on the Helles Memorial on the tip of the Gallipoli peninsular and at St. Stephen's where he was baptised twenty-one years earlier. He is also on the Roll of Honour at Salendine Nook Baptist Church.

Harry's two brothers James and Samuel also served in the army. Samuel did three years in the Yorks and Lancashire Regiment from 1916. Both survived which must have been some comfort to their widowed mother.

RAWCLIFFE, HARRY LINGARD. Sergeant. No 11247. 8th Battalion Duke of Wellington's Regiment. Born Urmston, Manchester, 8.3.1894. Son of Ellen and the late Samuel Robert Rawcliffe, 255 New Hey Road, Salendine Nook, Huddersfield. Educated Urmston Higher Grade and Ickneild Street School, Birmingham. Employed as a warehouseman by Messrs Fisher and Company, of Upperhead Row, Huddersfield. Single. Enlisted 21.8.1914. Reported wounded and missing at Suvla Bay, Gallipoli, on 9.8.1915 and afterwards presumed to have been killed on that date. He was 21 years of age. Has no known grave. Commemorated HELLES MEMORIAL TO THE MISSING, GALLIPOLI.