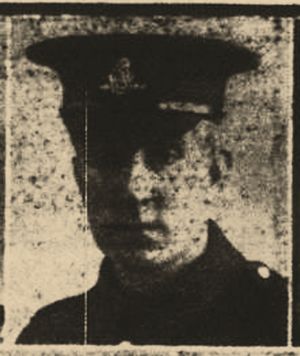 Harry Kathro was born in Lindley, the son of colliery time keeper James Kathro and his wife Annie.

By 1901, the family was residing at Dene View, Kirkburton, and Harry was working as a commercial clerk.

By 1911, he had married Annie Popplewell[1] and was living with his in-laws at 3 Back Colne Terrace, Aspley, where he was working as window cleaner. Their daughter, Ena Katho, was born on 5 April 1914.

He was attested into the Army Reserve in December 1915 and was post abroad in September 1916. His service record noted that he was 5' 3" tall.

Private HARRY KATHRO (35), of the West Riding Regiment, has been killed in action. Before enlisting he lived at 3, Back Colne Terrace, Aspley. He leaves a widow and one child.

9th Battalion, Duke of Wellington's Regiment | Huddersfield and District Roll of Honour | People
This page was last modified on 17 May 2020, at 11:14.