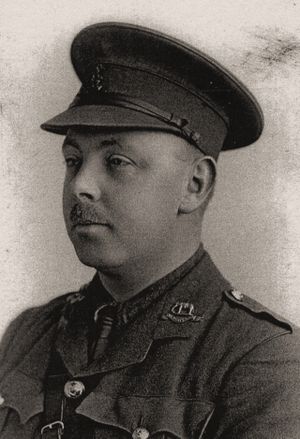 He had served with the Territorial Force before the War and was re-commissioned on 21 September 1914.

Captain Hanson was assisting in the recruiting committee of the Huddersfield battalion of the Duke of Wellington's, the 2/5th when it was formed in November 1914.

Harold came from the right background to be an officer — indeed it is inconceivable that he serve as anything else. He was born in 1881 and baptised in St. Peter's in the centre of Huddersfield in 1884 along with his younger brother Lewis. Their father John described himself as a "surveyor" and gave his address as Milnsbridge.

At that time John Hanson had just returned to Huddersfield after being the Borough Surveyor for Barnsley. The man he had been articled to as a young surveyor, John Abbey, had died, and he took over the practice.

The family were moving up in the world: by 1891 there was another son, Geoffrey, and they lived at the top of Heaton Road, Gledholt, a few minutes from the newly-opened Greenhead Park. Living with them was a nurse to look after three-year-old Geoffrey, and a cook. Father was by then a "Civil Engineer" and an employer.

Ten years later they had moved further up in the world and lived at Holmwood, one of the big houses on Kaffir Road, Edgerton. They no longer needed a nurse, but employed two housemaids.

We don't know which school the Hanson children attended but it was probably one of the town's private establishments or like some others from similar backgrounds, he was sent away to school. However, Harold did attend Leeds University

Their education — and presumably, background — served them well: in 1911 at the age of 29, Harold was, like his father, a civil engineer, and became a partner in his father's practice; the two younger brothers were "woollen cloth manufacturers" and described as employers in their own right.

And the family had moved further up the housing ladder no doubt to reflect their increased prosperity. They left Edgerton for the relatively suburban Lindley for Daisy Lea, a substantial house of 14 rooms. The exclusive private road, Daisy Lea Lane, was still a tram-ride away from the town centre where, no doubt, John Hanson had his office. However, prosperity did not save them from loss: three of the Hanson's six children had died before 1911.

Harold, by this time owned the Lodge House on Daisy Lea.

When the war began his brothers probably also enlisted, though they were not in the forces by the summer of 1915.

Harold's Territorial battalion, the 2/5th was initially a "home service" battalion and never embarked for France until the January of 1917, after conscription compelled every man to serve where required. Harold's medal card says he arrived in France on 17 May 1917 so he may have subsequently transferred to the 1/4th Battalion, which had been in France since 1915.

He was soon commanding D Company and highly regarded by his fellow officers: despite being "unsuitable by age to the rigours of trench warfare" he "always tried to remain cheerful and ... make the best of things".

Harold was wounded by a shell on 29 November 1917 in the Vlamertinghe area of Ypres soon after the end of the Battle of Passchendaele[1] and died two days later on 1 December, just over six months after he arrived in France.

The Nine Elms cemetery was begun when the 3rd Australian and the 44th Casualty clearing station moved there in September 1917 and was in use until the December.

No records can be found for any of the three Hanson brothers, which does not mean the other two did not serve. All we can say for sure is that they were not killed.

5th Battalion, Duke of Wellington's Regiment | Huddersfield and District Roll of Honour | Lindley Roll of Honour | People
This page was last modified on 10 July 2019 and has been edited by Dave Pattern.