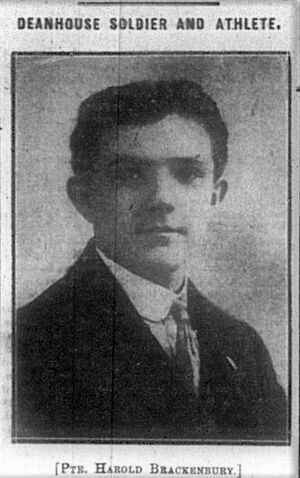 BRACKENBURY, HAROLD. Private. No 33222. 6th Battalion York and Lancaster Regiment. Formerly No 31383 Duke of Wellington's Regiment. Born Thongsbridge. Son of Mrs J. Brackenbury, 33 Deanhouse. Educated at Netherthong National School. Attended the Wesleyan Church, Netherthong. Employed at Albion Mills, Thongsbridge. Was a member of the Burnlee Association football club. Enlisted March, 1917, and left for France on 20.6.1917. Had been home on leave a few weeks before he died and in his last letter to his mother he wrote 'It felt hard leaving home.' Died of wounds, 1.10.1918, aged 20. Buried CHAPEL CORNER CEMETERY, SAUCHY-LESTREE. Grave location:- Row C, Grave 12.

The Holmfirth Express reported the following details of Harold Brackenbury’s life and death. He was born in Thongsbridge, West Yorkshire, the eldest of the three children of Josephine Brackenbury. He attended Netherthong National School, “being one of Mr Jackson’s old scholars and was also connected with the Wesleyan cause at Netherthong. Upon leaving day school he worked at Albion Mills, Thongsbridge. An athlete, he was an active member of the Burnlee Association football club.”

Harold joined the colours during the latter end of March 1917 and was in training with the Duke of Wellington’s, leaving England on 20 June 1917. After reaching France he was transferred from the ‘Dukes’ to the York and Lancaster Regiment. “Of a cheerful disposition Harold Brackenbury made friends wherever he went and is much missed, not only in the home, but by his pals in the battalion.”

The paper reported “His mother has received a message stating that Harold died on 1 October 1918 from wounds received in action in France. The news came with greater severity because the mother had received a message from her son but two days previously stating that he was quite well. Home and its environments were to Brackenbury very dear and it can be readily imagined that it was to him a great privilege to be allowed quite recently to come home on leave and move about the village, and in his last letter he said he would be glad when the war was over for he wrote ‘it feels hard leaving home’.”

Harold had a younger brother Clarence, whose name is inscribed next to Harold's on the Netherthong Parish War Memorial located in a small garden opposite All Saints Church, Netherthong. We have been unable to find any details of Clarence's military service so it is probable that he met some misfortune during training. We do know that Clarence died in 1921 aged 21.

Huddersfield and District Roll of Honour | People | York and Lancaster Regiment
This page was last modified on 18 May 2020, at 09:32.