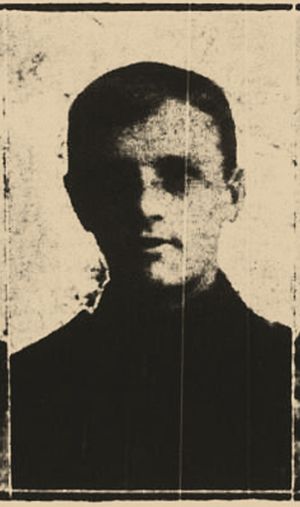 Handel Dean was born in Lindley on 18 March 1892, the son of Joel and Emma also from Lindley, and baptised on 6 April 1892 at the Methodist New Connexion Chapel on Lidget Street. At that time the family lived in West Street, only a few minutes walk from the chapel.

A few years later, in 1901, they were living in Dearn Fold, that small path that leads off East Street opposite the Black Bull public house and coincidentally is where the Sykes carding business began over half a century before. It may be the same address described nine years earlier as West Street.

Handel was not the first child of Joel and Emma. His brother, Haydn, was born in 1890. One can guess that Mr. and Mrs. Dean may have been fond of classical music, attending performances whenever possible and possibly involved in the local silver band. However, Handel was probably named after his grandfather who had the same names.[1]

Both boys were enrolled in the Zion Chapel Sunday School on Lidget Street in April 1898.

By profession Joel was an "Oat Bread Baker" and famous for his oatcakes, sold in the village. Joel worked for himself like his father before him. By 1911 they were living on West Street at number 49, which may have been the location of the bakery as Joel worked "at home". They had had a total of four children all boys, and all had survived. The youngest was Harry, a good twelve years younger than the next, Walter, who like his brothers, was eventually enrolled in the Sunday School. With four rooms at number 49, there were probably enough bedrooms for it not to seem too overcrowded, even as the lads grew up.

The three older boys did not follow their father into the family business: perhaps it could not support more employees. Like their neighbours the boys went into the textile industry: Hayden as a sorter, Handel a healder, working for Messrs. Ben Crosland at Oakes, and Walter a warper.

As a young man, Handel was a member of the Lindley Adult School.

Handel enlisted early in the war joining the 1/5th Battalion at Huddersfield in October 1914 although he may have been medically examined at Milnsbridge. His service number is just 126 higher than Ernest Dearnley from Cadogan Avenue.

The battalion prepared in England until 14 April 1915 when it entrained at Doncaster Station for Folkestone to sail on the SS Manchester Importer for France with the West Riding Division. By this time Handel's brother Hayden was serving with the Home Service battalion of the 5th.

In a letter sent to his father, Handel described how he and a small group of men came under shell fire while "in reserve billets" some 200 yards from the firing line and took shelter in a basement. The roof of the house received a direct hit — no one was hurt but all their greatcoats were peppered with shrapnel. Handel kept a piece as a souvenir. He died some months later after seven months at the Front.

Handel died following a severe abdomen wound at No 10 Casualty Clearing Station on 22 November 1915, barely seven months after landing in France. The Lijssenthoek Military Cemetery is located where the C.C.S. was established, in the Ypres area.

Back in Lindley, Handel's mother and father received the news surprisingly quickly via letters from the chaplain at the hospital where he died, who described Handel's funeral, and from Sergeant Howard of the 1/5th.

Handel is remembered on the memorial in St. Stephen's and on the Zion Chapel memorial and Roll of Honour. Walter as well as Hayden, served and thankfully both survived the war.