The following page provides information about historic Ordnance Survey maps of the Huddersfield area, many of which are available to view freely on the National Library of Scotland's (NLS) web site.

Clicking on the rectangles marked on the maps below will show you the name of the relevant O.S. map sheet.

When viewing a page on Huddersfield Exposed that contains a location, you can click on the "Details & Links" tab to find handy direct links to the relevant map sheets on the NLS web site: 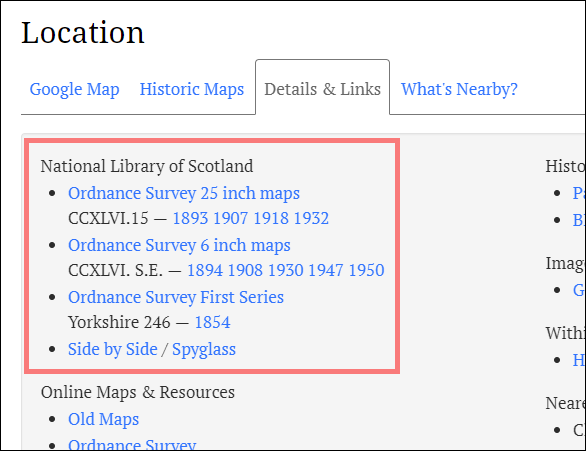 The first maps of the area to be publisher by the O.S. are usually referred to as the First Series, with each individual county covered by a series of numbered sheets.

The O.S. surveyors conducted their interior survey of the local area in the late 1840s and the First Series maps were published between 1854 and 1855. Each sheet covers an area of approximately 24 square miles (62km²).

The following table provides links to the available sheets on the NLS web site.

Once the O.S. surveyors had completed their arduous task of producing the First Series maps for the entire country, they began surveying again for the first revision (sometimes referred to as the Second Series).

The areas covered by each First Series map was subdivided in four quadrants (northwest, northeast, southwest and southeast), with the map numbering changed to Roman numerals. For example, the Yorkshire 246 map (which covered the centre of Huddersfield) was divided into:

A separate clickable map which provides links to all of the available 6 Inch maps is also available.

An index of the available 6 Inch maps for the whole of Yorkshire is available on the NLS web site, together with a clickable map.

Published at the same time as the revised 6 Inch Series, the 25 Inch Series adopted the same Roman numeral numbering but subdivided the area covered by the correspondent First Series map into sixteen smaller areas which are numbered as follows:

The complete list of available 25 Inch sheets for the country of Yorkshire can be found on the NLS web site, along with a clickable map.