The farm is named as "Barley Misery" on the 1854 Ordnance Survey map, but appears on later maps as Thewlis Lane Farm. However, the original name remained in use locally.

Within a few years, Tom Graham had moved to nearby Dryclough Farm and his younger brother, Joseph (1837-1895), had taken over Barley Misery. Both were sons of local stone mason and builder Abraham Graham (1804-1871), whose work included the Britannia Buildings and Deanhouse Workhouse.

At the time of the 1881 Census, Joseph was listed as the farmer of "Graham's Farm", together with his wife Sarah Ann (née Barrow) and farmhand Thomas Woodall (aged 34). He had previous worked as a stone merchant's contractor in the Crosland Moor area (1871 Census).

The 1891 Census records the next farmhand as being Robert Southwaite (aged 59).

In March 1895, Joseph Graham placed a notice in the press for a "sober" farmer man. He died a few months later on 22 September 1895, leaving effects worth around £825 to his widow.

By 1911, George Henry Goddard was the farmer, along with his wife Frances Eliza. Assisting him was farm horseman Fred Puckering.

On 17 October 1934, the freehold of the farm was auctioned in Huddersfield, and was described as comprising the farm buildings and "35 acres of land in the occupation of Mr. Wm. Battye."[2] 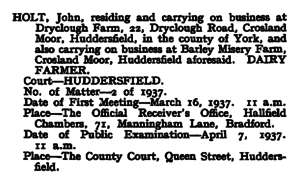 The farm buildings were granted a Grade II Listing status in September 1978 with the following description:

However, it seems the buildings then quickly fell into a state of disrepair and had mostly collapsed within a decade.

Planning permission was granted in the mid-1990s for the last remaining wall to be demolished.[4]

The Listed status was eventually withdrawn after a "survey of the area by West Yorkshire Archaeology Services in 2012 reported that the farmhouse and barn were derelict."

In 2014, Kirklees Council granted permission for mineral extraction to take place on the land and the whole area is now quarried by Johnsons Wellfield Quarries Ltd.[5]

Buildings | Demolished buildings | Farms | Listed buildings and monuments
This page was last modified on 30 December 2020, at 14:21.