Golcar was a township within the Parish of Huddersfield which was comprised of two hamlets — West Golcar and East Golcar.

The principal place of worship was St. John's Church. 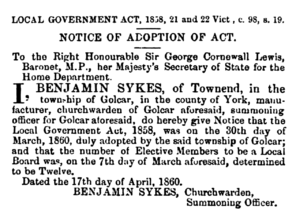 Golcar Local Board was formed on 30 March 1860 with an initial membership of 12. It was abolished at the end of 1894 and was superseded by Golcar Urban District.

Under the Representation of the People Act of 1918, the urban district became part of the Colne Valley Parliamentary Division.[1]

Golcar Urban District was abolished on 1 April 1937 and the area divided as follows (population figures are from the 1931 Census):

Situated on the Huddersfield and Manchester Railway, Golcar Station was opened in August 1849. It was closed to passengers on 6 October 1968.

Golcar is a populous township in the parish of Huddersfield, extending from about two to five miles west from that town. The manufacture of coarse woollen cloths, chiefly for the Huddersfield market, is carried on here to a great extent; and finer cloths are also made, with which some of the inhabitants travel through different parts of the country. In the production of these articles a very considerable power from water and steam is employed — there being in motion, in the two townships of Golcar and Longwood, twelve water wheels, of the united power of one hundred and seventy horses, and three steam engines, equal to the exertion of fifty-seven horses. In Golcar a church was erected, in 1829, from the fund placed at the disposal of the commissioners appointed by parliament for the erection of additional churches: it is dedicated to St. John; the living is in the presentation of the vicar of Huddersfield. There are two free schools, erected by subscription in 1816; and one upon the national plan, opened in 1831. The township of Golcar contained, by the returns for 1831, 3,143 inhabitants.

GOLCAR, a chapelry, in the parish and union of Huddersfield, Upper division of the wapentake of Agbrigg, W. riding of York, 3¼ miles (W. by S.) from Huddersfield; containing 3598 inhabitants. The township comprises by computation 1560 acres, of which the surface is boldly undulated, rising in steep acclivities from the banks of the river Colne: here are several quarries of excellent stone. The manufacture of coarse woollen-cloths and padding has long been established, and that of articles of the finest texture has since been introduced; the machinery of the numerous mills is propelled by 12 water-wheels and 12 steam-engines. The Huddersfield and Manchester canal skirts the township, which contains various hamlets scattered on the sides and summit of Golcar Hill. Commodious baths have been erected at a mineral spring on the course of the Colne, the waters having been found useful in rheumatism and other disorders. The chapel, now a district church, dedicated to St. John, was erected in 1829, at an expense of £2865, defrayed by the Parliamentary Commissioners, with the exception of £500 raised by subscription; it is a handsome structure in the later English style, with a tower surmounted by a spire, and contains 950 sittings, of which 430 are free. The living is a perpetual curacy, in the patronage of the Vicar of Huddersfield; net income, £150. There are places of worship for Baptists and Wesleyans. Upon the high ground at the western extremity of the township was formerly a rocking-stone, so celebrated as to have been marked in old maps; and it is said there were other Druidical remains.

GOLCAR, a village, a township-chapelry, and a sub-district in Huddersfield district, W.R. Yorkshire. The village stands adjacent to the Manchester and Leeds railway, 3½ miles W by S of Huddersfield; and has a station on the railway, and a post office under Huddersfield. The chapelry includes also the village of Well-house; is in Huddersfield parish; and is separated by the river Colne from Almondbury. Acres, 1,560. Real property, £10,105. Pop. in 1851, 4,212; in 1861, 5,110. Houses, 1,019. Many of the inhabitants are employed in cloth manufacture; and the increase of pop. arose from the opening of new mills. There are mineral spa-baths, in much repute. The living is a vicarage in the diocese of Ripon. Value, £300. Patron, the Vicar of Huddersfield. The church was built in 1830 is in the early English style; and has a tower and spire. There are chapels for Baptists, Wesleyans, and New Connexion Methodists, two national schools, and a workhouse. The sub-district includes also three other townships of Huddersfield parish. Acres, 6,760. Pop., 13,783. Houses, 2,769.

The extent of the township (compiled from early O.S. maps) is shown below.

Civil Parishes | Parish of Huddersfield | Townships and Chapelries | Towns and villages
This page was last modified on 7 April 2020, at 14:39.