Early Baptists reportedly met in the upper rooms of the inn before building a chapel at Pole Moor in 1790.[2] 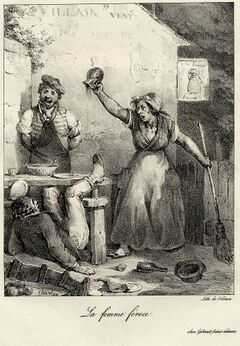 Signage for pubs known as the Silent Woman or Quiet Woman typically feature a headless woman either carrying her own head or a tray of refreshments. It is also common for the signage to feature a rhyme or saying, with examples including: "Soft words turneth away wrath" (Quiet Woman, Earl Sterndale, Derbyshire), "Here is a woman who has lost her head, she's quiet now – you see she's dead" and "Since the woman is quiet, let no man breed a riot" (Silent Woman, Wareham, Dorset[3]). A variant of the name is "Fort Bone".[4]

A letter published in the Essex Standard (22/Jan/1868) suggested the name had French origins where it was a common tavern sign, as referenced in the 1825 print "La femme féroce" held by the British Museum.[5]

In his 1916 book, Old tavern signs: an excursion in the history of hospitality, Fritz Endell notes that variants of name were also common elsewhere in Europe, including Holland and Italy.[6]