George William Oldham was a Derbyshire-born silk dyer who settled in South Crosland, living for many years at The Stubbings.

Together with his brother, he established a family-run business at Moll Spring Mills and Dye Works near Honley. 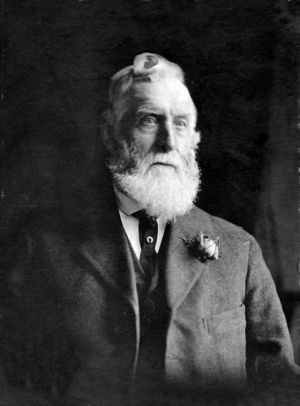 He was born on 30 April 1830 in Derby, the son of silk dyer William Woodruff Oldham and his wife Elizabeth (née Warmsley). Both of his grandfathers were also silk dyers.

According to an obituary article, he was the youngest of six children and it was feared he might die shortly after birth. Keen to have him baptised immediately, his parents asked a nurse to take him to All Saints' Church in Derby. Upon arriving, the nurse realised that in the rush, his parents had failed to inform her what name they wanted for the infant, so she was forced to choose the name "George William" herself.[1]

When he was only a few days old, his father left to keep a business appointment in America. Apparently the crossing was particularly rough and took thirteen weeks. For reasons that are unclear, he then decided to remain in America and never returned. Elizabeth then relied on support from her relatives and moved with her children to Macclesfield.[1]

At age ten, he began working at a silk factory in Macclesfield, where he gained a practical knowledge of the industry. By seventeen, he was working at William Wood's dyehouse at Gaythorne, Manchester, where he contracted cholera during an local outbreak but recovered. He then worked for a Mr. Salkeld in Dalton as a spun silk dyer until eventually lack of work led to his unemployment.

By the mid-1850s, he decided to start his own business and, together with his old brother Henry, they leased a dyehouse at Spring Vale, below Big Valley, Netherton, with £25 of capital. Although their money soon ran out, the brother struggled on and reportedly George once walked all the way from Brighouse back to Spring Val, carrying a large bungle of silk on his back.

He married Elizabeth Thompson on 24 December 1861 in Macclesfield.[2] They had four known children:

The construction of the Meltham Branch Line in the early 1860s led to concerns that the quality of water flowing to their dyeworks from the spring at Butternab would be compromised by the construction of Butternab Tunnel and the brothers moved their business to Moll Spring Mills and Dye Works in Honley in 1862.

The partnership between the brothers was dissolved around a decade later, although George continued to run the business. Eventually his son, George Thompson Oldham, took over from his father. Henry Oldham returned to live in Macclesfield and died in March 1876.

He was involved in the Honley Liberal Club (formed 1879) and was the club's president for several years.

By 1881, he had moved to The Stubbings on Lea Lane in South Crosland, where he remained for the rest of his life. His daughter Sarah Ellen continued to live at The Stubbings as a spinster until her own death in 1948.

In 1886, he was nominated to represent Honley on the Huddersfield Board of Guardians, together with Miss Emily Frances Siddon.[7]

From the late 1880s onwards, he was the president of the Honley Brass Band. To celebrate his 84th birthday, the band played outside The Stubbings on the afternoon of Saturday 2 May 1914. After a number of speeches wishing Mr. Oldham "continued long life, health, and prosperity", the band fished by playing "Auld Lang Syne".[8]

He became increasingly involved in other public duties, initially as a surveyor in Netherton — where he took on responsibility for inspecting and organising road repairs — and then becoming a village constable in Honley. He served on the Honley Local Board and then then Honley Urban District Council for a total of 27 years, eventually becoming an Alderman in 1910. By 1894, he was the chairman of the Deanhouse Workhouse committee.

Following his wife's death on 31 October 1900, he took an interest in the building of Storthes Hall Hospital in the early 1900s and became a West Riding magistrate in April 1905.

In April 1907, his workforce presented him with a silver rosebowl to commemorate fifty years in business and also his 77th birthday.

George William Oldham died peacefully at around 5am on 12 May 1914, only a few days after the celebrations to mark his 84th birthday, and was buried on 15 May in Honley.[9]