George Tindall was a printer, engraver and stationer.

He was born in 1833, the son of pipe maker John Tindall and his wife Mary (née Holt), and was baptised on 19 May 1833 at Huddersfield Parish Church.

He married three times, firstly to Hannah Maria Otty on 23 November 1857 at All Saints, Wakefield. The couple had four known children before her death in 1865:

Tindall was a naturalist and is believed to have been a founding member of the Huddersfield Literary and Scientific Society and delivered a paper entitled "Aquatic Beetles and their Transformations" in May 1857.[4] He was also involved with the formation of the West Riding Consolidated Naturalists' Society in 1861 (renamed the Yorkshire Naturalist Union at the end of 1876), publishing and co-editing the society's journal, The Naturalist.

By November 1857, he was the honorary secretary of the Huddersfield Early Closing Association.[5]

In March 1865, he took over 12 New Street (formerly occupied by chemist Mr. M. Wood) to open as a "bookselling and stationery establishment".[6]

In 1866, he published Tindall's Huddersfield Directory. 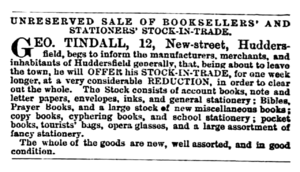 Following a sale of his stock during the summer of 1868, he was declared bankrupt and left the Huddersfield area.

He married Ann Booth Hobkirk, sister of local naturalist Charles C.P. Hobkirk, on 17 April 1869. The couple had four known children before her death in 1887:

He then spent the next couple of decades working as a travelling salesman and is known to have resided in Derbyshire, Oughtibridge near Sheffield(c.1870), Bradfield (1871), Camberwell in Surrey (c.1874-c.1877), Wheatley near Doncaster (1881).

By 1887, he had moved to Newmarket in Cambridgeshire, where his wife died aged 47. It was here that he took over the ownership of a stationery and printing business on the High Street.[10]

He married Catherine Jarrold in 1889 at Newmarket. The couple had two known children:

By the start of 1894, he was suffering from diabetes and paralysis.

Titles printed by Tindall include:

We regret to record the death of Mr George Tindall, of Newmarket, who died on Friday in last week. The deceased gentleman had been suffering from paralysis for the past 18 months, with diabetes. A fortnight ago he returned from Eastbourne, where he spent a few weeks seemingly in better health and spirits than usual. On Saturday. May 4th, he was seized with pain in the chest and stomach, and this recurred at intervals until Friday morning, when he became alarmingly worse, but lingered until evening, passing away about 20 minutes to nine. Mr. Tindall was 62 years of age, and had been resident in Newmarket for 12 years, previous to which he travelled the Eastern Counties for Messrs Millington and Sons for a long term of years. He was a P.M. in Freemasonry, a member of the Newmarket Burial Board, now absorbed in the Urban District Council, and was twice president of the Newmarket Working Men’s Conservative Club. It was largely through his efforts that the Club House was erected, and up to the Monday previous to his death he attended the weekly meetings of the Committee. He was a director of the Newmarket Baths and Laundry Co., in which he took a great interest. In his earlier life, spent in Yorkshire, he was one of the founders of the Yorkshire Naturalist Union, taking a great interest in British Lepidoptera, of which he collected the bulk of the known species. He was thrice married, and leaves ten children. The funeral will take place at the Newmarket Cemetery on Friday at 3 p.m.

Mr. Alfred Tindall was the second son of the late Mr. George Tindall, who came to Newmarket from Doncaster about 30 years ago, and bought from Mr. Wright the stationery and printing business that is still in the possession of the family. [...] Mr. George Tindall had four sons, Arthur (now in London), Alfred, George (now at Ely), and Louis (now at Norwich), and two daughters, Mrs. Jarrold (Soham) and Mrs. Hodgson (Seaford). Mr. George Tindall was an active politician, and took a prominent part in the founding of the Newmarket Conservative Working Men's Club, personally canvassing for subscriptions for building the rooms in Park Lane, now occupied by Mr. Walton's Racing Mission. Mr. George Tindall became a president of the club. His son Alfred also was elected on the committee and went through the chairs of vice-president and president.