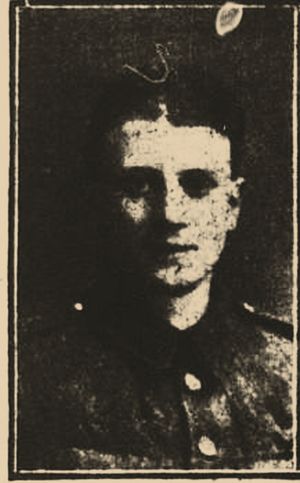 George Herbert Thorpe was the son of Thomas Henry and Jane Middlebrook Thorpe, of Huddersfield.

George Herbert did not live in the centre of Lindley but in Cleveland Road, which would be described, even in 1911, as being in Marsh. His name on the St. Stephen's church War Memorial suggest that this was the church at which his father Thomas Henry Thorpe, worshipped, his nearest Anglican church, in fact.

Thomas described himself as a "First Class Officer" in the Civil Service in the 1901 census. Both he and his mother had been born in Thurstonland, not far from Honley, but his employment entailed some moving home and he had married Jane Middlebrook in West Derby, Liverpool, in late 1891 and George, their first son, was born in 1894 in Walton in Liverpool.

Their second son, Alfred Henry, was born in Standish, near Manchester, in 1895.

Jane died in early 1895, possible from complications relating to childbirth, leaving Thomas to raise the two children. In 1901 he had the help of his widowed mother Clarinada, aged 78, who was living with him and the children. His position as a civil servant was sufficiently well paid to enable him to afford a live-in servant to help his mother around the house and with the children.

The loss of Jane must have weighed heavily on Thomas and to lose their mother must have been hard on the two children.

Clarinda died in early 1910 and by 1911, they had moved again. Thomas and the two boys lived at 36 Cleveland Road and the home was maintained with the help of a housekeeper, Lily Holmes, aged 42, originally from Shepley.

Thomas was by then a First Class Officer in Customs and Excise, which in Huddersfield must have meant overseeing local breweries. Alfred was following his father and was a "Student – Civil Service", a trainee post, perhaps. He was working in Edinburgh when the war started.

George however, was, in 1911, a seventeen-year-old bank clerk at the Huddersfield branch of the Yorkshire Penny Bank. Middle class lads like George and his brother would have had more than a local elementary school education, leaving at 12 or 13 years old. The fact that his brother was hoping to be a civil servant and George worked in a bank suggest they went to Huddersfield College after finishing at elementary school. The College memorial plaque — now at New College — bears the name G H Thorpe of the 5th Battalion Duke of Wellington's, and the dates are correct. George was a member of the Gledholt Wesleyan Sunday School and became one of the three joint secretaries

Thomas Henry died in early 1913 and George lodged with a Mrs. Haigh on George Street in the centre of Lindley.

While there is no Service Record for George we can deduce from his battalion, regiment and service number, that he enlisted early with many other local men and the Examiner reported that he joined on 4 September, 1914, the day after the big recruiting meeting in the Town Hall. He was promoted Lance Corporal a year later.

After a period in camps in the midlands, the 1/5th Territorial Battalion of the Duke of Wellington's, went to France in 1915, landing in Boulogne on 14 April, as part of the 49th (West Riding) Division.

In early May, George was the first man in the battalion to be wounded, being shot in the leg, and in a letter to the Methodist Recorder seemed to feel he might die and said he was not afraid of death.

George was soon Corporal in charge of the Battalion Bombers and seems to have been very popular with the men. About two weeks before he died George, and another Duke, a Newsome lad called Frank Dean, was recommended for the Distinguished Conduct certificate for bomb throwing in an advanced sap on 26 September.

George was killed on 17 November 1915 when, according to the Battalion diary, the Germans bombed battalion saps that extended into No Man's Land: the battalion was holding the particularly dangerous Ypres Left Sector. That month, the battalion lost seven killed and 40 wounded. In a previous "tour" of this sector ten men had died, including Arnold G. Dyson of Lidget Street.

The Talina farm Cemetery, just 4 miles north of Ypres, where George is buried, contains over 500 other identified Commonwealth graves and is very near to where he died.

George is, as we have said, remembered in St. Stephen's and on the Huddersfield College memorial found in New College, and he is also remembered on the memorial in the Gledholt Chapel. His brother Alfred is recorded among "those who served".

THORPE, GEORGE HERBERT. Corporal. No 2787. 'A' Company, 1/5th Battalion Duke of Wellington's Regiment. Born Walton, Liverpool, 16.5.1893. Elder son of the late Thomas Henry Thorpe, Customs and Excise Officer, and Jane Middlebrook Thorpe, Cleveland Road, Edgerton, Huddersfield. Since his father's death had lodged with Mrs Haigh, of George Street, Huddersfield. Educated Oakes Council School, Huddersfield College and Municipal Secondary School. Employed as a bank clerk in the Huddersfield branch of the Yorkshire Penny Bank. Was one of three joint secretaries of the Gledholt Wesleyan Sunday School. Enlisted 4.9.1914. Was promoted Lance Corporal a year later. At the beginning of November, 1915, along with Private FRANK DEAN, (died of wounds, 13.11.1915), q.v., was recommended for the Distinguished Conduct Certificate for bomb throwing in an advanced sap on 26.9.1915. A member of the Battalion bombers, of whom Corporal Thorpe was in command, said that their position was about the worst on the front as regarded getting the water away and none of them had had dry clothes on for 12 days, 'We had November 5th in the trenches and the Boche were a bit lively. Bert Thorpe was recommended for the D.C.M. but they granted him a gallantry card and he was complimented by the Colonel. He is the Corporal of the bombers and we were called up to help another Regiment to bomb the Germans and we did very well. Indeed we did everything but go over to them so he was recommended. Bert is a trump and a champion to work under. The last time in the Germans started bombing us so we bombed them. Bert took his coat off and threw 70 bombs back. When things quietened down he said 'Come on lads, let us sing a bit.' He started us and then he was so tired that he fell in the bottom of the trench. He had fallen asleep stood up! We groped for him in the mud and picked him up and then had a good laugh and treated it as a joke.' Killed in action, 17.11.1915, at Boesinghenear Ypres, aged 22. Buried TALANA FARM CEMETERY. Grave location:- Plot 3, Row E, Grave 1.