George Herbert Mitchell was born on 1 June 1893 at Thurgoland, near Barnsley, the son of farmer George Mitchell and his wife Ruth Agnes (née Jones).

Together with siblings Alice Mary, Stanley, and Ellen, he was baptised on 9 December 1900 at St. Thomas's church, Thurstonland. His other siblings were Arnold, Albert Sedric Owen, Ruth Freda Joyce, Queenie Millicent, and William Whiteley.

By the time of the 1911 Census, he was working as a hairdresser. 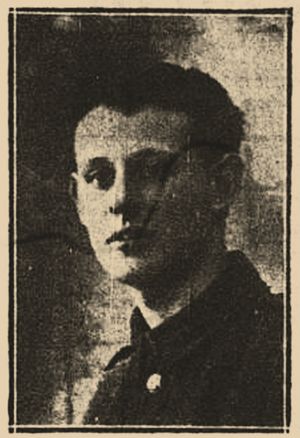 Private Mitchell, along with a Dewsbury lad, who has received a similar award, made for the German trenches, loaded with hand-grenades. As they left their officers bade them "Good-bye." But they came back smiling and empty-handed, and the Germans who could at all get away did so very smartly. Private Mitchell and his comrade completely cleared the trench by themselves, a really brace performance.

Private Mitchell is the first solider to bring distinction to Almondbury. By trade he is a hairdresser, and when the war broke out was in business for himself in the village. He was 22 years of age last June. He attended the Almondbury Council School, under Mr. Gent, the then headmaster, but who is now at Oakes Council School. He attended the Church Sunday School, and was formerly a member of the choir of All Saints' for over three years. He enlisted in the 1/5th Duke of Wellington's West Riding Regiment, and left this country for France in April, 1915

5th Battalion, Duke of Wellington's Regiment | Huddersfield and District Roll of Honour | People | Recipients of the Military Medal
This page was last modified on 3 April 2021, at 17:17.