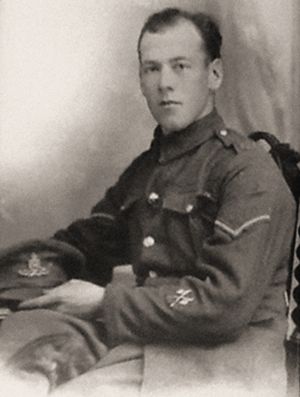 George Henry Nutton was the son of Albert and Susan Annie Nutton, of 16 Brian Street, Lindley.

Albert Nutton married Sarah Annie Bullock on 25 July 1891 at the Methodist church on East Street. He was a coachman living in Marsh whose father was a retired police superintendent. Sarah was a housemaid living and perhaps working, in Mountjoy Street, not far from Huddersfield town centre. He had been born in Stainland, she in Staffordshire. Her father was deceased and, like Albert, had been a coachman.

Two years later, on 26 May 1893 their first child was born and baptised George Henry at the same church on 25 June 1893. George would eventually attend Oakes Board School at the top of nearby Wellington Street.

After a gap of some ten years, two more children followed: Arthur and Jack, born in 1903 and 1905. This gap would normally suggest they had lost children in infancy; on the 1911 census they claim this is not the case and that they only had three children in total, all born in the village.

Albert was still a coachman in 1911 and lived at the Lodge, Green Lea. Green Lea was a large house and grounds that stretched between Occupation Rd and Acre Street. The house was owned by Frederick William Sykes, one of the partners in the family firm that owned the Card Clothing Company on Acre Street, one of the biggest employers in the village. The lodge was numbered 54 Acre Street but may have been further inside the Green Lea estate.[1]

While Green Lea could boast 30 rooms, Albert and his family had to make-do with four in the Lodge.

George aged 18 in 1911, was also employed by the Sykes family: he was an apprentice in the card-making factory on Acre St and only had to walk across the road to work. A member of St. Stephen's church Bible Class, and a keen footballer.

George enlisted in the artillery in November 1914, rather than the Duke of Wellington's. His Medal Roll index card says he arrived in France on 11 July 1915. At some point he was promoted Corporal.

George was awaiting leave to return home and marry when he was accidentally burned, He died of his injuries at No. 13 Casualty Clearing Station on 25 September 1917.

The cemetery at Tincourt, in the area of the Somme, was established around a casualty clearing station.

George is also remembered in his church, St Stephen's.