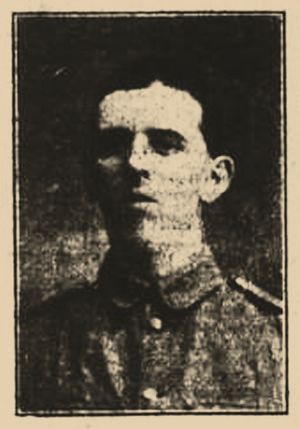 George Henry Jennings, known as Harry, was a regular soldier. When the war began in August 1914, he had been a soldier for several years and was with his battalion in Singapore. There they remained until relieved by a Territorial unit in October. They arrived in Southampton on 9 November 1914 and then spent some time at Hursley Park 10 miles to the north.

Harry was able to come home for Christmas 1914 before his battalion transferred to France, landing at Le Havre on 16 January 1915. He would probably have spent that Christmas at 55 Quarmby Fold.

Harry's father John was a cabinet maker, born in Sowerby Bridge in 1854, and his mother Ruth in Penistone in about 1865. They were married at St John the Baptist, Halifax in 1881 when Ruth Hodgson was only 17.

They were living in Sowerby Bridge in 1892 when Harry was born. They already had three children Annie, Mary and Albert; John's widowed mother also lived with them.

Tragedy struck the family: John died before the 1901 census. By that year Ruth was in Moldgreen looking after 18 year old Annie and Mary, 15, both of whom were "woollen twisters". Harry, or George Henry, as it said in the census, was still at school. His brother Albert (who was incorrectly named as "Gilbert" by the census enumerator) was a "Butcher's Errand boy" at the age of 13.

Life could not have been easy for the young widow– she was only 36 — with only the wages of two teenage workers coming into the family home.

In late summer 1906 Ruth married John Albert Roebuck and at some point the family moved to 56 Quarmby Fold where they were living when Harry enlisted. We don't know why he chose to become a soldier but it may have been that he just did not fancy a life in a woollen mill like so many of his contemporaries.

Harry died in the Ypres area of Belgium in February 1915. According to the Huddersfield Daily Examiner, which quotes a letter to Ruth form his colonel, Ingham Brooke, he was shot having "...dashed out of the trenches to the assistance of a wounded comrade". The colonel described his actions as "noble".

It must have proved impossible to recover Harry's body and he has no known grave but is remembered on the Menin Gate, Ypres and in St. Stephen's church, although his name is spelt there without the "s".

JENNINGS, GEORGE HENRY. Private. No 10403. 1st Battalion King's Own Yorkshire Light Infantry. Born Sowerby Bridge. Son of the late John Jennings and of Mrs Roebuck, 56 Quarmby Fold, Quarmby. Had been in the army for several years. He was in India at the outbreak of the war and was home on leave at Christmas, 1914. Embarked for France in January, 1915. Killed in action, 13.2.1915, aged 23 years. Has no known grave. Commemorated MENIN GATE MEMORIAL TO THE MISSING.

His mother received a letter from Lieutenant-Colonel C. E. Ingham-Brooke. who wrote, 'I must regret to inform you that Number 10403 Private H. Jennings was killed in action on the morning of the 13th February. It will I hope be some comfort to you to know that he died a most noble death having dashed out of the trenches to the assistance of a wounded comrade. It was whilst he was helping this wounded man that he was unfortunately shot dead by the enemy. He gave his life to help his comrade. It is impossible to do anything more noble. Offering you my deepest sympathy believe me.'