George Creaser was a tailor, chemist, optician and telescope manufacturer who lived most of his life in Meltham.

He was born in Scampston, North Yorkshire, in 1802, the son of Francis and Elizabeth Creaser, and was baptised on 18 July 1802.

His older brother was tailor John Creaser (1786-1875), who also moved to Meltham from North Yorkshire. John was the grandfather of noted local Francis William Creaser (1858-1954).

He married Hannah Turner on 20 June 1835 at All Hallows in Almondbury. The couple had one known child:

Creaser designed the Oddfellows' Hall in Meltham, which was built in 1851.

The Meltham Mechanics' Institution held an excursion in July 1853 to the newly built observatory of Ebenezer Tinker, Esq. — known as Tinker's Monument — at Pike Law near Holmfirth.[2] The Huddersfield Chronicle reported that the observatory had been equipped with "several powerful telescopes, under the superintendence of Mr. Creaser, of Meltham" but sadly the "hazy state of the weather" meant that little could be observed through them. Instead, the day was ended with a fireworks display.

He travelled to Derby to give "a most interesting lecture" on the topic of "The Science of Astronomy" to the Staveley Mechanics' Institution on 16 November 1853.[3]

The Chronicle recorded the following lectures given by Creaser to the Meltham Mechanics' Institution:

He also gave a lecture on the topic of "Astronomy" in October 1868 to the Meltham Working Men's Club. 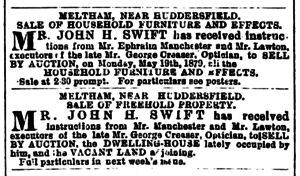 Sarah Creaser died in September 1878 and was buried on 26 September at St. James, Meltham Mills.[8]

His Last Will and Testament was proved by shopkeeper Ephraim Manchester of Meltham Mills and by Joah Lawton, the superintendent and manager of the Meltham Convalescent Home. The two men then arranged for the sale of Creaser's property and belongings at an auction held on 19 May.