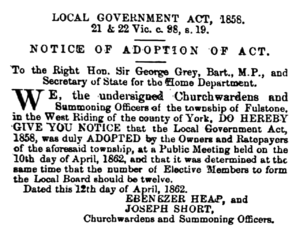 Fulstone Local Board was the local authority body primarily responsible for issues relating to public health in the Township of Fulstone and was formed on 10 April 1862 with an initial membership of twelve persons.

The district covered by the local board (shaded green), as shown on the 1892 O.S. maps, covered the entirety of the township of Fulstone with the exception of about 60 acres of land which was the responsibility of Scholes Local Board. The local board was also responsible for three small detached parcels of land in the neighbouring township of Wooldale, including one at Hade Edge.