From Village to Town: A Series of Random Reminiscences of Batley During the Past 30 Years (1882) by Isaac Binns 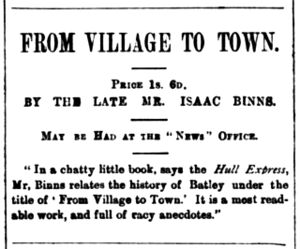 From Village to Town: A Series of Random Reminiscences of Batley During the Past 30 Years was written by Isaac Binns and published in 1882 by F. H. Purchas of Commercial Street, Batley.

Binns was born on 24 October 1844 at Birkenshaw, the son of groom Abraham Binns and his wife Sarah, and was baptised on 15 December 1844 at St. Peter's, Birstall.

He married Sarah Thurman Robinson in 1866 and the couple had five known children.

By 1871, he was working as a secretary at a woollen mill. He became the Borough Accountant for Batley Corporation on 15 October 1874 and remained in the position until his death on 6 August 1884 aged only 39. He was buried at Grove United Reformed Chapel, Gomersal.

This book was digitised in partnership with Huddersfield Local History Society.

Isaac Binns died in August 1844 and his literary works are now in the Public Domain.

From Village to Town: A Series of Random Reminiscences of Batley During the Past 30 Years (1882) by Isaac Binns

Books, booklets and pamphlets | Books about Batley | Public Domain books about Yorkshire | Works in the Public Domain
This page was last modified on 4 May 2022, at 21:57.