From Cottage to Mill: A family story of clothiers and woollen manufacturers in the West Riding of Yorkshire was written by Bob Hirst and published privately by the author in 2022.

Several copies of the book have been donated to Kirklees Libraries. 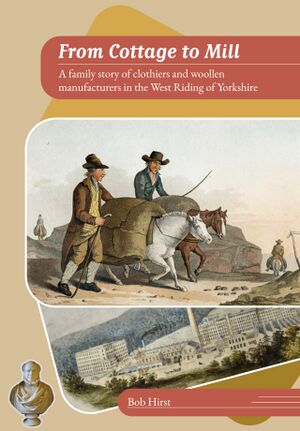 By following the lives of the Hirst family of Greave, starting in the late 18th century, and setting their lives and accomplishments within the context of the times, this book provides a case study of the transition from domestic to mill manufacture in the woollen business. The earlier Hirsts were clothiers who settled in the small hamlet of Greave, near Meltham. One descendant, Joseph Hirst, transformed himself from a small-scale master clothier into a woollen and worsted manufacturer, utilising three mills. Along with his growth as a businessman came the acquisition of land and the development of Greave into the village Wilshaw with a church, school and housing - a small-scale model village. The book also explores the role of men like Joseph Hirst, their early paternalistic role and later their contributions through money and service to local development. The story unfolds across a little longer than a century, ending with a comparison of the Greave/Wilshaw community between the late 18th and early 20th centuries.