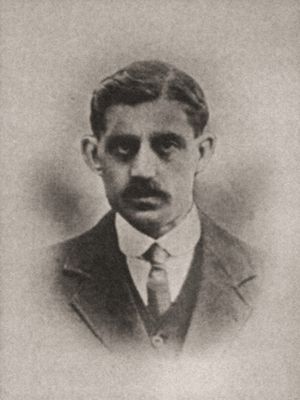 His younger brother, Harold, served with the West Riding Regiment and was reported missing in June 1917.[1]

Fred Turton was born at Underbank, Holmfirth on 21 March 1882 to Joe and Mary Turton. He was baptised 22 May 1887 at Holy Trinity Church, Holmfirth.

On the 1911 census, he was living at 32 Cinderhills, Holmfirth, along with his widowed father and three siblings. His occupation is shown as a cloth tenterer for a woollen manufacturer.

He married Rosa Hampshire at Christ Church, New Mill on 1 January 1916 and at the time of his death was living at 19 Greenfield Bank, New Mill.

Before the war he was working at Taylor and Littlewood, Newsome Mills.

At 34, Fred Turton was much older. He was also married – to Rosa, on New Year’s Day, 1916 at Christ Church in New Mill and they lived at 9 Greenhill Bank Road. Fred was a Woollen Teaser and Rosa was a Woollen Warper. They had both left it fairly late to get married, Fred at 34 and Rosa at 28 and had only been together for a few months when Fred was ordered to the colours in May. He enlisted at Halifax and was sent to the 2nd Battalion, Durham Light Infantry, one of four men commemorated at New Mill who were members of that regiment.

Given that his training would have lasted 5-6 months, he would have only just joined his battalion in France on the Somme in October 1916 when he was killed. By then the British were battling their way up the Bauparme Road and along the banks of the Ancre. Despite the worsening weather, Le Sara was captured on the 7th October, the Schwaben Redoubt finally fell a few days later, but one of the first day objectives, Beaumont Hamel (where James Broadbent was killed on July 1st) wasn’t taken until November.

Fred’s battalion, the D.L.I. fought with the rest of the 6th Division attacking Le Transloy on the 15th October. The intensity of the attack is reflected in the fact that the battalion, in a few short hours, lost eight Second Lieutenants – two killed and six wounded. Fred was one of the twenty-one other ranks killed that morning.

Durham Light Infantry | Huddersfield and District Roll of Honour | People
This page was last modified on 9 June 2020, at 20:06.