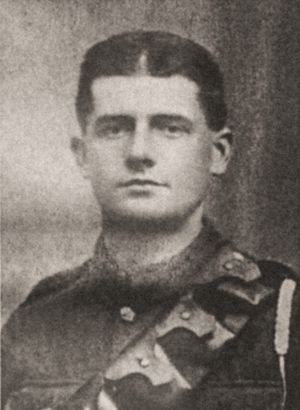 Fred England was born on 19 March 1891, the son of woollen weaver Ben and Emily England of Butterley, Fulstone. Amongst his siblings were Herbert, Percy Holmes, Elise May, and John Henry.[1]

By 1901, Ben was working as a heald rug dyer and the family had moved to New Mill. By 1911, the family was residing at 8 Huddersfield Road, New Mill. The census of that year recorded Fred as a "wool dyer labourer" and Percy as a "grocer shop assistant".

Fred and Percy enlisted in November 1914, and both joined the Royal Field Artillery.

ENGLAND, FRED. Lance Bombardier. No 35516 'A' Battery, 38th Brigade Royal Field Artillery. Born New Mill, Holmfirth. Son of Ben and Emily England of Sycamore Cottage, New Mill. Educated at New Mill National School and also attended the Sunday School. Employed as a dyer by Messrs Beaumonts, of Honley. Enlisted, 9.11.1914, with his brother, Percy, the two joining the R.F.A. Crossed the Channel together in September, 1915. Percy was wounded on 17.7.1916 and spent a long time in hospital, eventually being discharged from the Army. Fred was wounded in the head on 27.4.1918. Admitted into No 14 General Hospital, Boulogne, the following day and died of his wounds on 9.5.1918, aged 27 years. Buried BOULOGNE EASTERN CEMETERY. Grave location:- Plot 9, Row B, Grave 61.

Huddersfield and District Roll of Honour | People | Royal Field Artillery
This page was last modified on 17 May 2020, at 11:11.