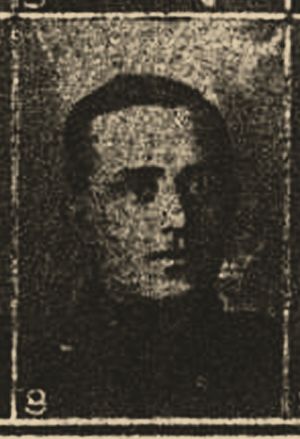 Fred Durrans was the son of Arthur and Lena Durrans, of 16 Wellington Street, Lindley, Huddersfield.

In 1901 the Durrans household and the five others next to them on the census sheet contained thirty people, of whom nineteen were in work. Seven of those clearly worked in the textile industry covering most processes in the manufacture of cloth.

Of the rest, seven worked in a process related to textile manufacturing, card making at the Sykes factory around the corner on Acre Street.

Not surprisingly then, seventeen-year-old Fred was one of those who worked at the Sykes factory. Like his father, he was a "card setting machine tender". His sister, Elizabeth, two years his junior, had a similar job in card making. So it is not fanciful to suppose that Arthur Durrans secured employment for the two of his four children that were no longer at school. It was not badly paid: adult machine "tenters" were earning nearly £2 a week during that time. "Apprentices", proportionately less. And they had a trade union.

In addition to the card making company there were many woollen mills on Plover Road and along the New Hey Road in Oakes and Marsh, and a cotton spinning company at Acre Mills so there were plenty of opportunities for employment.

Arthur and his wife Lena had been born in Liversedge but were living at Hartshead Moor when Fred was born on 29 November 1883, and it is probable that the family had moved to Lindley for the work. The Durrans' youngest child, Percy, was born in Lindley in 1891 and Frank, three years older, was born in Liversedge, so they had been there for some ten years to twelve years by 1901.

Interestingly, the Durrans had a boarder, Jessie Walker, 35, who did the same work as Elizabeth, and was also born in Hartshead. Possible they had been neighbours back when Fred was born and Jessie turned to them for accommodation when she found work in Lindley.

Many of their neighbours were also "comers-in", some from as away as Cheshire.

Fred and probably his brothers and sisters, attended Oakes Board School close by at the top of Wellington Street.

It has proved impossible to find the 1911 census form for the Durrans but the Summary Book suggests they lived at 16 Wellington Street. Only Frank had moved out — he married Agnes Noble in the summer of 1908 and in 1911 was living in Quarmby Fold two doors away from his in-laws.

By the time he enlisted, Fred was working at the Sykes card works on Acre Street.

Fred's Service Record is sparse. We know that he Frank and his brother Percy both joined on the same day — 3 September 1914 — and that when Fred was medically examined later that day for the Territorial Force his height was 5' 5½” and his chest measured 35 inches when fully expanded. His physical development was described as "good".

It was very early in the war and after over a week of meetings as part of an intense recruitment drive, when the brothers and many other Lindley men, including Arnold Dyson and Herbert Hey — put their names forward. Nationally, a record number of Britons, over 32,200, came forward to join up.

Fred was still a single man and the chance of adventure may have motivated him, and many other men he knew must have been doing the same. Certainly at that stage conscription was not talked about and the conflict was expected last only a short time.

Fred went into the local 1/5th Battalion and after a period in many camps in England such as Clipstone in Mansfield, the battalion landed in France on 14 April 1915.

He may have been single at the time he enlisted, but it seems likely he was "courting": he married Ann Elizabeth Ambler, the daughter of Joseph Ambler, a strap maker, of 39 Main Road, Primrose Hill at Rashcliffe Parish Church — the Ambler's local church — on 5 February 1916. Fred's brother Frank, and sister Elizabeth were witnesses.

The marriage was by special license — unlike the other marriage on the same day — so was carried out in a hurry. The 1/5th had been in France since the 14 April 1915 so Fred was probably on Home Leave. Fred gave his profession as "soldier": he no longer defined himself as a card maker and probably married in uniform.

At the age of thirty, Fred was older than most of his fellows and must have been a good soldier as he was promoted corporal and then "lance" — or acting — sergeant.

Fred was wounded on the failed attack on the on the "Pope's Nose" redoubt on the 3 September, in which at least seven men from Huddersfield died, including five from Lindley one of whom, Llewleyn Brick was a neighbour of Fred's at 77 Wellington Street.

Fred had been wounded in the thighs and was taken to a Casualty Clearing Station where it was thought he would recover but in fact he quickly succumbed to his injuries, dying soon after the Examiner reported his injuries on 13 September.

Early in the war a Red Cross hospital was established at the coastal town of Wimereux in the Nord Pas-de–Calais area, for sick and wounded soldiers, and the town soon became the Headquarters of the Queen Mary's Army Auxilliary Corps. Thousands of British and Commonwealth injured passed through the hospital. Over 2800 are buried in that part of the town cemetery set aside for war dead. Fred Durrans died just months after he married Ann, and lies buried in Wimereux.

The army records are incomplete but it would be safe to assume that like other Lindley widows we have found, Ann received her 12/6d benefit. There is no evidence that she ever remarried.